As has been reported by bloggers over the past day, the Waterloo Region Branch of the Ontario Genealogical Society is going to re-invent itself as "an e-presence only, with a new website and the creation of a Facebook group. The new website will have a members only section and an e-store. Queries will be handled via this on-line presence”.
The press release that was issued as part of the OGS e-Newsletter on Saturday, said that “Since this Branch is modeled on that of our on-line based Special Interest Groups, the fee, as decided by the Branch, is a bargain of $4 for the first year due to the website being "under construction" as members and the TSIC Committee of OGS work to place items, prior to January 1st, 2016, in the members only section related to research in the County of Waterloo. The same as with other OGS Branch members only sections on websites, the "stocking" of the section will be ongoing. There will be no newsletter, no physical Branch meetings and no postal mailing address”.
The OGS says that that this is a “pilot project authorized by the Board in order to explore alternatives when the volunteer base for a Branch becomes too small to provide all of the services that have been provided in the past”.
So is this the way for the future of the OGS as members disappear? The membership has been decreasing for years, and something had to give, so to speak, and this looks like it may be a solution. What do you think? And this news comes a day after the 2016 re-membership drive starts. It will be interesting time ahead, I think.
As of this morning, the Waterloo Branch still has a website at http://www.waterlooogs.ca/ with limited information. They still have cemetery CDs at for sale at http://www.waterlooogs.ca/cemeteries.htm, and the following family CDs - Bauman/Bowman Family, Bechtel, Bergey, Biehn, Bricker, Eby, Erb, Groh, Hallman, Hoffman, Lichty, Martin, Snyder, Shantz, Wanner and Weber are available for $20 each.
Happy Researching!!
===========================================================================

If you missed last week’s edition, it is
at http://genealogycanada.blogspot.com/2015/11/canadian-week-in-review-cwr-02-november.html
It’s the ONLY news blog of its kind in Canada!
It has been published on a continuous basis every Monday since April 2012!

Posted by Elizabeth Lapointe at 8:21 AM No comments: Links to this post

If you wish to learn more about William George (Billy) Barker, go to
http://www.biographi.ca/en/bio/barker_william_george_15E.html

In 1971, La Presse, the largest French-language daily in North America, announced the suspension of publication in Montreal. The paper, with a circulation of 225,000, shut down because of the threat of increasing violence in a labor dispute. It resumed publication in February, 1972.

To be brought up on the latest news about La Presse, go to http://montrealgazette.com/business/local-business/montreal-la-presse-to-end-weekday-printed-paper-in-new-year

A piece of shared Dutch and Canadian history has been honoured at Stayner’s high school.

(Video) This Week in History: A Royal BC Museum photograph exhibition in Guangzhou, China

Lieutenant Colonel John Frederick Crease (1836 – 1907) was mastering the art and science of photography, and captured various images of Canton, China immediately following the Anglo-French bombardment of the city.

Now, 156 years later, these photographs are being presented in Guangzhou (formerly Canton) as part of an exhibition: “Guangzhou to British Columbia – The Chinese Canadian Experience.”

Ireland's Minister for Arts, Heritage and the Gaeltacht is visiting New Brunswick this week as part of this year's International Famine Commemoration.

Artist Tim Van Horn is trying to answer that question with his Canadian Mosaic Project.

With a goal of taking photos of 54,000 Canadians ahead of the nation's 150th birthday in 2017, Van Horn has already captured 42,000 citizens with a camera. On Thursday, he stopped to collect Saskatoon faces.

Here's a look at what was making the news 25 and 50 years ago in the Hants Journal, Nova Scotia.

It was retired several years ago but this week an old DC3 Second World War airplane was on the move again. Jackie Wilson tells us about this historical craft and where its final resting place will be.

Heritage Trust Nova Scotia has asked Amherst to give it some time to come up with an alternative to demolishing the former BMO building in the downtown.

Evan and Nick Densmore's ship sat on the banks of the Stewiacke River waiting for the tide to rise. The Densmores had hoped the new moon tide would lift the boat safely over sandbars and shoals into the water — and it did.

But I discovered one rainy afternoon that the Musee de La Civilisation is where natives head when they can't enjoy outdoor attractions.

Canadian history books and classes concentrated primarily on political and military events, neglecting to offer information on how women have impacted our nation and have thus been impacted by our nation.

The leaves are falling and genealogy is calling, so let’s celebrate Family History Month in North America.

Whose Mother would this monstrous monument be?

The first is the controversial Memorial to the Victims of Communism, planned for a prime piece of Ottawa’s parliamentary real estate near the Supreme Court of Canada – a site long designated for a new Federal Court building, and the second is the Mother Canada statue, a privately promoted expression of monumentality proposed for an evocative coastline site in Cape Breton Highlands National Park.

A new full-day tour of Calgary delves deep into the city’s past. The Herald asked Judy Uwiera of Lifetime Adventures Travel to talk about the new offering for visitors and residents alike.

Coffee with: New city archivist loves opening windows into the past

When Jennifer Yuhasz took her first steps into the world of documenting history, she didn’t have to go very far. As a grade schooler, she simply explored her grandparents’ yard on the family cattle and wheat farm two hours southeast of Regina, Saskatchewan.

Canadian Women on our banknotes, please! 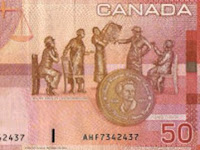 I see where the town of Oakville, Ontario has joined a chorus of voices calling for Canadian women to be pictured on Canadian currency.

The Oakville council voted unanimously recently to encourage the Bank of Canada and federal Minister of Finance to add prominent Canadian women to Canadian bank notes.

Did you know that in 2004, the Bank of Canada circulated a $50 bill honouring the contributions of Therese Casgrain, first woman to lead a political party in Canada, and The Famous Five - Nelly McClung, Emily Murphy, Irene Parlby, Bouise McKinney and Henrietta Edwards?

This $50 bank note was eventually taken out of circulation in 2011 and replaced with one featuring the Prime Minister William Lyon Mackenzie King and an icebreaker.

There is an online petition at https://www.change.org/p/bank-of-canada-add-women-from-canadian-history-to-canadian-bank-notes

So far has more than 64,000 supporters and other municipalities have passed similar motions.

If you missed last week’s edition, it is
at http://genealogycanada.blogspot.com/2015/10/canadian-week-in-review-cwr-26-october.html
It’s the ONLY news blog of its kind in Canada!
It has been published on a continuous basis every Monday since April 2012!
Posted by Elizabeth Lapointe at 12:30 AM No comments: Links to this post