About noontime, we arrived in the town of Hawkesbury. 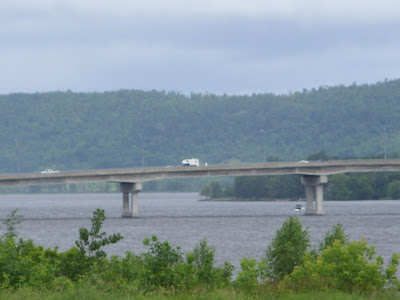 This is the Long-Sault Bridge, which we crossed over between Grenville, Quebec and Hawkesbury.
But the main site I wanted to see on this trip was the Higginson Observation Tower at Vankleek Hill. 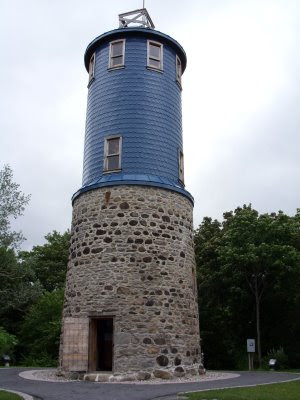 The tower was originally built be Lieutenant-Colonel Thomas Higginson, an Irishman who settled in Vankleek Hill in 1829.

The tower was first built by him as a windmill about 1830 so that he could grind wheat and corn, but it failed due to inconsistent wind power.

He then turned it into the first private observatory in Eastern Ontario.

In 2003, it was decided by the business people of Vankleek Hill to restore the tower to its former glory, and now you can visit it by walking up the stairs inside to the top of the tower, and take in the wonderful view of the village and the hills of Quebec to the north.

At the foot of the tower, going all around it in a circle, are bricks of stone with the businesses and people who contributed to the restoration of the tower.

After spending an hour there, we took old Highway 17 back to Ottawa and passed through the villages of Alfred, L'Orignal, Plantagenet, Riceville, Treadville, and Wendover.

We stopped in at L'Orignal to take the Jailhouse Tour, but it was raining, and since there was a tour underway, we decided not to wait. Instead, we took a tour around town, and took pictures of various buildings, including this one of the land office. 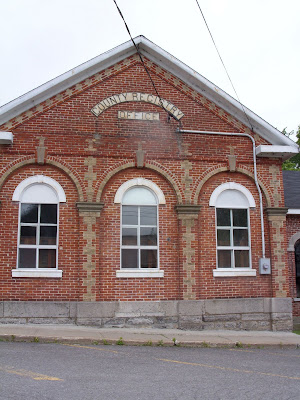 Hawkesbury and the subsequent villages we visited on our way back to Ottawa are located in Prescott County, and they have an excellent genealogy site at <www.rootsweb.ancestry.com/~onpresco>.

After an enjoyable ride through this part of Ontario, we stopped into Orleans (Ottawa East) for a lovely supper, took a ride into downtown Ottawa, and then went home. 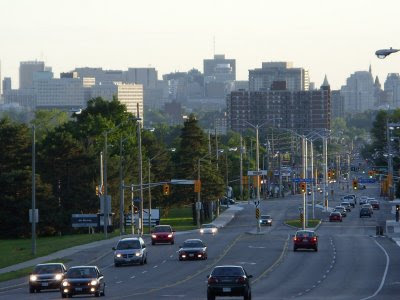 Facing west, here is a picture of Ottawa's skyline at dusk (taken several miles away).
Posted by Elizabeth Lapointe at 12:49 PM No comments: