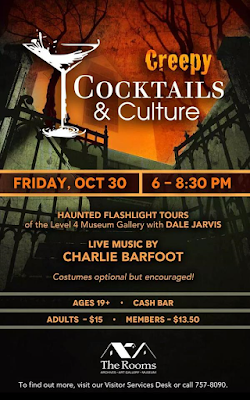 Earlier this year, in the summer, The Rooms, which is the Provincial Archives of Newfoundland and Labrador, had an open house to celebrate it's 10th anniversary.

And now they will host a HALLOWEEN COCKTAILS AND CULTURE event on Friday, October 30 from 6 - 8:30 pm and they will have a haunted flashlight tours of the Level 4 Museum Gallery with Dale Jarvis and live music by Charlie Barfoot.

And why is it called The Rooms?

The Rooms was a term used by early British fishermen that they used to called the "fishing rooms". The fishing rooms were common at the seashore in every Newfoundland fishing villages.

You can also go to http://www.therooms.ca/archives/family_history_collections.asp and see what is available as far as Vital Statistics is concerned.

Check the Canadian Week in Review (CWR) every Monday morning for the latest in Genealogy, Heritage, and History news in Canada.If you missed last week’s edition, it is
at http://genealogycanada.blogspot.com/2015/10/canadian-week-in-review-05-october-2015.html