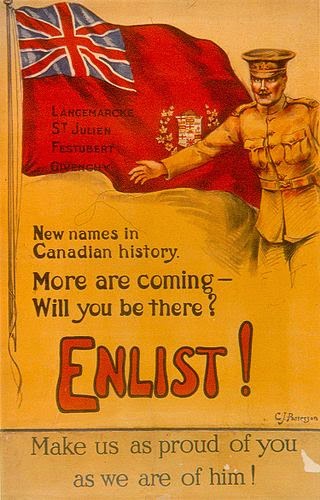 The pre-August 1914 Canadian Expeditionary Force Registers are now online at Canadiana at http://www.canadiana.ca/en/cef-register They are an important part of the picture of the First World War because they tell us who was in the militia, when they enlisted, how much they were paid. With the personnel files of the Canadian Expeditionary Force available at the Library and Archives Canada, we can paint a fairly complete picture of the life of a Canadian soldier.

Many of these battalions were broken up on arrival in Europe and absorbed into existing reserve units before being fed piecemeal to reinforce units at the Front.

And I have run into this many times in my research. For instance, they may have left Canada as a member of the 1st Canadian Division and ended up in the 4th Canadian Division when they were sent from England to fight in France. So read the service file very carefully.

The Canadian Army Services Registers are -

So if you think that your First World War person was in the militia before the war broke out, or he put the division on his enlistment paper, check these registers to see if he is there.
Posted by Elizabeth Lapointe at 12:30 AM 1 comment: