On Saturday, May 11, The Bitish Isles Family History Society of Greater Ottawa  (BIFGSGO) will hold a pre-meeting which will feature Comparing FTM, Legacy and Rootsmagic - An Overview which is a part of Before BIFHSGO Education Talks at 9:00 am, and it will be presented by Ken McKinlay.

The main presentation called Building a One-Name Study: The Influence of Computers, The Internet, and DNA will be held from 10:00 am to 11:30 am, and it will be presented by Bill Arthurs.

This presentation will feature the Titus One-Name Study from its inception before the era of computers, through its progression with the advent of the internet, construction of a website, and the use of DNA research.

You can go to and listen to Bill at http://bifhsgo.ca/cpage.php?pt=106 as he talks with Brooke Broadbent about his start in genealogy and One Name Studies.

If you are interested in certain surnames, you can check the surnames on http://bifhsgo.ca/surname.php. There are 1, 293 Internet pages onsite.

The website of BIFHSGO is http://bifhsgo.ca
Posted by Elizabeth Lapointe at 1:25 PM No comments: 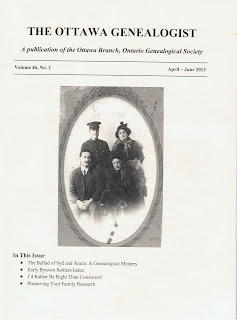 The Spring/Summer 2013 edition of The Ottawa Genealogist has been released, and it contains an interesting article, and index. It is published by the Ottawa Branch of the Ontario Genealogical Society.

The article is by John Patton and it is called the Ballad of Syd and Annie: A Genealogical Mystery, and it is a story of two people, whose story is totally unbelievable. Sydney Frank LEWER (1892- c.1925), is an Englishman who immigrated to Canada in 1909. He gave so many birthdates, it is difficult to understand exactly when he was born. And the plot thickens when he meets Annie HOSKO. There was apparent deception in an adoption process of a son, unusual evidence in a his First World War military record, prison sentence because of a bigamy charge, and on and on it goes. Their life together was turbulent, to say the least, ending with the fact that he possibly may have died in 1925 – at least his wife declared herself a widow at that time.

This article shows that good research can go a long way in resolving these genealogical mysteries such as this.

The index of Early Bytown Settlers Index in this issue go from the letter D to the I. It gives the name, reference and page number, and some information, such as where they lived, their occupation, their age.

To go to the website of the Ottawa Genealogical Society, the website is at http://ogsottawa.on.ca
Posted by Elizabeth Lapointe at 7:21 AM No comments: