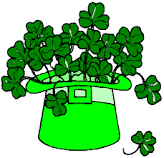 A good place to start researching the Irish who came to Canada, is the Library and Archives Canada site at http://www.bac-lac.gc.ca/eng/discover/immigration/history-ethnic-cultural/Pages/irish.aspx
They say that ‘Canada's most recent census returns list the Irish as the fourth largest ethnic group in Canada with almost four and a half million Canadians claiming either some or full Irish lineage. Indeed, this bond between Canada and Ireland has been in existence for centuries’.

At this site, they have the Genealogy and Family History section, where they list under the headings of Research at Library and Archives Canada, Research in Published Sources, and Research at Other Insitutions and Online sources that may hold answer to your Irish research.

So if you have Irish anscestors, this may be a good place to start your Irish research.

It’s the ONLY news blog of its kind in Canada!
It has been a regular post every Monday morning since
April 23, 2012.
Posted by Elizabeth Lapointe at 2:30 PM No comments:

Why is St Patrick's Day such a time of celebration and remembrance in Canada?

Maybe the following statistics will give you a clue.

By 1867, the Irish were the second largest ethnic group (after the French), and comprised 24% of Canada's population.

In my neighbourhood of Ottawa-Gatineau, there is the famous McCabe List: Early Irish in the Ottawa Valley.

At http://www.dippam.ac.uk/ied/records/22293dpf, there is a list of the McCabe Irish which gives county, parish, townland of origin, number of male and female children and names and addresses of relatives in the homeland for some 700 mostly Irish families who were in the vicinity of Bytown (now known as Ottawa) on 5 February 1829.

It’s the ONLY news blog of its kind in Canada!
It has been a regular post every Monday morning since
April 23, 2012.
Posted by Elizabeth Lapointe at 12:30 AM No comments: