I said on my Twitter posting that I was to going to the Ottawa Genealogical Society's Gene-O-Rama, and I did - to both Friday evening's Pat Horan Memorial Lecture, and to Saturday's lectures.

The speaker Friday evening was Dr. Bruce Curtis, a professor of Sociology at Ottawa's Carleton University. His topic was entitled, "Locating, Identifying, Knowing: Census Making in Canada in 1871". 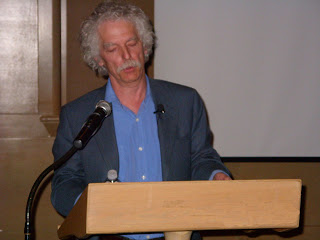 This was an interesting and thought-provoking talk, as it showed the thought processes behind the 1871 Census. It was called "the census with the pastoral vision" because the political people wanted to show (even if it was slightly untrue) how pastoral Canada was at that time.

And, of course, we know it was the beginning of a population shift, as millions of Canadians went south looking for work in the factories of the Northeastern States and to the Northwestern States for jobs in the lumber industry. Canada was becoming more industrialized as time went on - so the country was anything but pastoral.

He told about how the 1861 Canadian Census was such a boondoggle (it was taken in the winter, sometimes the enumerator wasn't educated, the enumerator sheets weren't protected against the weather, etc.) that the government of the day vowed that the 1871 Census was not going to be the same.

Instead, enumerators were given smaller, folded sheets to record their information, they were trained to take the answers, and it was the first time a population map was drawn up of the country.

It was also the first time also that both migration and religion were recorded. No one was allowed to put down "Canada" as their answer to the question, "Where are you from?" - you had to put down the country where you or your people were originally from so that the governent knew where their people were from.

You can access the 1871 Canada Census through inter-library loan of microfilm from the LAC, or browse the Ontario Province of the 1871 Census on the Internet through the LAC (head of household only) at <www.collectionscanada.gc.ca/databases/1871-ontario/index-html>, or search the whole census through Ancestry.ca.

After the lecture, we went out of the auditorium and had juice/coffee and cookies. We had our sights firmly set on Saturday and the delights it would bring. I already see where John Reid has posted a picture of me on his Anglo-Celtic Connections blog. (Yes, John, you caught me totally unprepared for that one ... touche!)
Posted by Elizabeth Lapointe at 5:57 PM No comments: