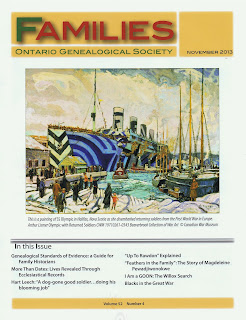 The Ontario Genealogy Society issued its journal Families for November, and here are the papers included in Part I this issue. Part II will continue tomorrow.

With 2014 being the 100th anniversary of the First World War, the papers about the people who fought in that war are starting to come into Families to be published.

The two papers are

But while he was fighting in the war, he earned the praise of his superiors, and when he died helping his fellow soldiers, he was given a burial in the Oville British Cemetery in France.

His mother received the Memorial Cross.

The keywords in the paper is Leech.

The ship on the front cover of Families and is the SS Olympic. It is shown in Halifax as it disembarked Canadian soldiers coming back from the First World War.

Blacks in the Great War by Jerry Hind is a paper which recounts the role that Blacks played in the First World War.

The men from the Chatham-Kent area who entered the 1st Contingent of the Canadian Expeditionary Force and the discrimination that they faced.

To go with the Families paper, there is a website called
Gathering our Heroes at http://www.gatheringourheroes.ca/ at which there are bios of many of the Blacks who were in the No. 2 Construction Battalion.

The keywords are Jones, Hosey, Lucas, and Mills.

Postscrpt:  December is the yearly membership drive by the OGS. This year the basic membership is $61.20 which is a deal for all the benefits that you can receive from the Members Only pages at http://www.ogs.on.ca/index.php
Posted by Elizabeth Lapointe at 12:30 AM No comments: Links to this post