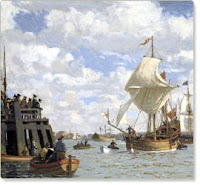 They built the Charles Fort, make a treaty with the local chief and spend the winter trading fur.

The financial success of this venture lead to the creation of the Hudson's Bay Company.

To read more, go to http://www.hbcheritage.ca/hbcheritage/history/transportation/nonsuch/home

Nine people invested in Order of Newfoundland and Labrador

In recognition of their outstanding contributions to the province, nine people were invested into the Order of Newfoundland and Labrador.

There's no official count of how many abandoned structures each municipality holds. But the costs of monitoring and demolishing them quickly add up

There was a public archaeological dig at the site of what is believed to be a worker's cottage or bunkhouse from the original construction phase of the Shubenacadie Canal between 1826 and 1831.

More than 300 workers, many from Ireland and Scotland, arrived in 1826 to begin construction. Work on the waterway wouldn't wrap up until 35 years later.

Amherst heritage building unlikely to get reprieve from destruction

A historic Amherst building, built of the region's famous red sand, will be lost to the town if money can't be found to repair it.

Known as the BMO building — even though the bank moved out in the 1920s — the downtown building on the corner of Victoria and LaPlanche streets was most recently the home of the Amherst Police Department until the building was condemned in the 1990s.

Clennel (Punch) Dickins, well-known Edmonton bush pilot, was at the controls of the Western Canada Airways plane — the first pilot to fly 6,379 kilometres over the Barren Lands between Hudson Bay and the Mackenzie River basin.

Since 1992, Canada has celebrated Women's History Month. October has been selected because of the historical significance of the "Persons Case" decision of 1929, a landmark victory in the struggle of Canadian women for equality. The highlight of the month is the celebration of Person's Day on October 18th. The theme for Women’s History Month 2015 is “Her Story, Our Story: Celebrating Canadian Women”.

This theme highlights the outstanding achievements of women who have shaped the nation in which we live; as pioneers taking the first bold steps into the unknown, as innovators accelerating progress, and as activists at the vanguard of social change. Canada’s history is rich with examples of women who have made a difference in the world and all Canadians can benefit from getting to know their stories.

Some facts you may not know about Canadian women are -

In 1813, Laura Secord walked 32 kilometres to warn Lieutenant James Fitzgibbon of impending danger of attack by the Americans during the War of 1812.

In 1908, Lucy Maud Montgomery of Prince Edward Island published Anne of Green Gables. It became an instant bestseller, selling more than 19,000 copies in the first five months. It remains one of the bestselling and most beloved books of all time.

During the First World War (1914–1918), more than 2,800 women served with the Royal Canadian Army Medical Corps, with the majority serving overseas in hospitals, on board hospital ships, in several theatres of war and in combat zones with field ambulance units.

In 2009, Commander Josée Kurtz became the first woman in Canadian history to assume command of a major warship when she took control of the frigate HMCS Halifax.

You can read more about the Women's History Month at http://www.swc-cfc.gc.ca/commemoration/whm-mhf/educator-educateur-en.html

And that was the week in Canadian news!
Posted by Elizabeth Lapointe at 12:30 AM No comments: