Reflection on Archivists and Genealogists

A paper in the winter 2013 issue of Families I thought warranted a special post of its own since it was the Houston Memorial Lecture called Reflection on Archivists and Genealogists at last year conference of the OGS in Kingston, Ontario given by Dr. Ian E. Wilson, former chief archivist of the Library and Archives of Canada.

Besides giving a brief history of the LAC, in the last paragraphs of his paper, he talks about the “New challenges to archival services and genealogical research are becoming painfully apparent, as federal budget decisions work their way through to the local level”.

It is clear to genealogists and genealogy societies as they try to do genealogy research at the building at 395 Wellington Street in Ottawa, that they are becoming less and less welcome by Public Works – the department who ones and operates the building.

So if you get a chance, read his paper because it does shed a light on the LAC as it was in his tenure as Chief Archivists and what it is today – a shell of its former shelf.

The site for the OGS is www.ogs.on.ca
Posted by Elizabeth Lapointe at 12:47 PM No comments: Links to this post 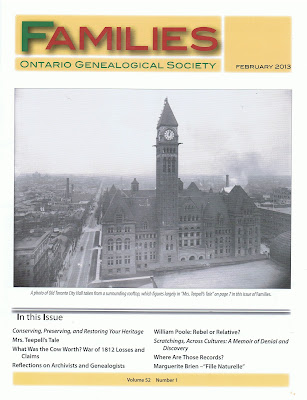 The latest issue of Families (the journal of the Ontario Genealogical Society, of which I am the editor) has just been released to the members of the society.

There are the articles in this issue –

Conserving, Preserving, and Restoring Your Heritage by Kim Kinnis. This is an excerpt from a book that was jointly published in 2013 by Dundurn Press and the OGS, that take you through the “saving” process ar home. This book is also reviewed on page 33 of Families.

Mrs. Teepell’s Tale by Anne Rahamut is exactly that – a tale about how a number of houses were exported to make room for the Old City Hall Building in Toronto, that you see on the cover.

The surnames mentioned in the article are BAILEY, BROOMFIELD, CORBOULD, TEEPLE.

This article by Anne Rahamut was the third place winner in the 2011 Keffer Writing Contest.

Willam Poole: Rebel or Relative? by Brian Latham, and he had a brick wall - where was William Poole. Read the article and see how he solved it.

Scrathings, Across Cultures: A Memoir of Denial and Discovery is a book by Stephen Heeney. The part that was published in this issue was Chapter 7 of the book Squire and Jane Davis in Onondaga in Brant County, Ontario.

The last article is Marguerite Brien – “Fille Naturelle” by Bill Amell tells about his Aboriginal ancestor, nd her life in Northern Ontario.

If you wish to receive a copy of Families, go to http://www.ogs.on.ca to become a member.
Posted by Elizabeth Lapointe at 7:58 AM No comments: Links to this post

Don’t forget to check my blog every Monday morning for my New/Updated Websites, Blogs, and Newspaper Articles.

There will be newspaper articles tomorrow about the West Lorne Women’s Institute, the LDS church in Bowmansville expands, Tammy Tipler-Priolo tells us how she buys genealogical books online, and the sad news about our penny.

Something of interest for everyone!

Elizabeth
Posted by Elizabeth Lapointe at 5:00 AM No comments: Links to this post