To read more about the Canada Company, go to http://en.wikipedia.org/wiki/Canada_Company

(Video) The First World War: Excerpts from the Diary of Woodman Leonard
http://www.ottawasun.com/2014/10/03/the-first-world-war-excerpts-from-the-diary-of-woodman-leonard
If war wasn’t enough to endure, Canadian soldiers had the Battle of the Somme, ammunition shortages, low rations, and the rain that turned everything into mud!
===================================================
Elgin County Ontario Canada and Talbot Times Genealogy Blog
http://elgincountyogs.blogspot.com/2014_10_01_archive.html
Researching Elgin Roots in the Tweed Area

Glasgow to get direct flights to Nova Scotia
http://www.telegraph.co.uk/travel/destinations/europe/uk/scotland/11138532/Glasgow-to-get-direct-flights-to-Nova-Scotia.html
WestJet, the Canadian airline, has announced a new, direct service from Glasgow to Halifax in Nova Scotia

Franklin ship found in Arctic was HMS Erebus
http://www.thestar.com/news/canada/2014/10/01/franklin_expedition_ship_identified_as_hms_erebus.html
The shipwreck located by researchers last month was HMS Erebus, which Sir John Franklin sailed on during his doomed 1845 quest to find the Northwest Passage to Asia.

Canada's Lancaster bomber returns home after historic U.K. tour
http://www.ctvnews.ca/canada/canada-s-lancaster-bomber-returns-home-after-historic-u-k-tour-1.2028602#ixzz3EjQqP0tD
Canada’s only operational Second World War-era Lancaster bomber plane was met by hundreds of cheering onlookers and a Scottish marching band as it touched down in Hamilton Sunday after a historic aerial tour in the U.K.

Hudson's Bay Company announces donation of historic mural to The Manitoba Museum
http://money.cnn.com/news/newsfeeds/articles/prnewswire/C2346.htm
The Pioneer at Fort Garry, a 16.5-metre by 3-metre oil-on-canvas mural, which had been a fixture in the Hudson's Bay Winnipeg Downtown store since 1927, was removed in January 2014 in preparation for donation to The Manitoba Museum.

Canadian History Ehx: The early settlers of Grenfell
http://www.grenfellsun.sk.ca/News/2014-09-29/article-3886443/Canadian-History-Ehx%3A-The-early-settlers-of-Grenfell/1
In the early 1870s, the area of Grenfell was open prairie, with a few missionaries and fur traders passing through every so often.

A piece of Saskatoon history finds a new home
http://www.thestarphoenix.com/piece+Saskatoon+history+finds+home/10244200/story.html
The Bedford Road Collegiate gymnasium has found a new home at the Brainsport.

Legacy of Heroes looks at history of aircraft used in criminal pursuit
http://www.630ched.com/2014/10/01/legacy-of-heroes-looks-at-history-of-aircraft-used-in-criminal-pursuit/
The new issue is called “Flight into Danger”, and Jeff Awid, Writer/Producer with EPS Corporate Communications Branch, says it chronicles the first time in Canadian history that aircraft was used in a criminal pursuit. 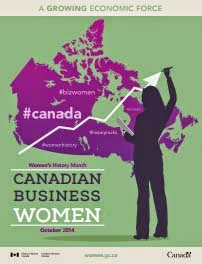 As a person who owns my own business at www.elrs.biz, I read the facts that are on the Status of Women Canada webite at http://www.swc-cfc.gc.ca/commemoration/whm-mhf/facts-faits-eng.html with interest, because October is Women’s History Month.

The first fact that is on the page is that women represent 47.3% of the Canadian labour force today, which is good news. And the good news for people who are involved in the genealogy business is that in 2011, women held the majority ownership of 16% of small- and medium-sized businesses – although women were more likely to own small- rather than medium-sized businesses.
.
They have a 31-day-challenge this year, and it is to share historic and recent information about Canadian women in business, every day, on your favourite social media platform. That sounds like a really good idea!