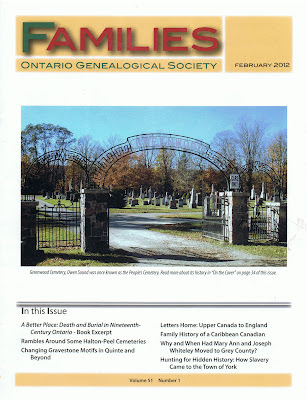 Photo – A cover photo by Janet Iles of the Greenwood Cemetery in Owen Sound, which was once known as the “People's Cemetery”. Read more about its history in “On the Cover” on page 34 of this issue.

The Ontario Genealogical Society's journal, Families (of which I am the editor) was released in February of this year.

As usual, there were two themes to this issue – Ontario Cemeteries, and Ontario Heritage.

The excerpt was from the book, A Better Place: Death and Burial in Nineteenth-Century Ontario, by Susan Smart in which Chapter 6: The Establishment of Cemeteries in Three Towns (the three towns were Peterborough, Kingston, and Niagara-on-the-Lake) was reprinted in full. Plus, a book review was written about the book on page 32.

To continue the cemetery theme, two more articles about Ontario - Rambles Around Some Halton-Peel Cemeteries by Dorothy Kew, in which she gives an excellent review (with photos) of cemeteries of Halton-Peel, and an article, Changing Gravestone Motifs in Quinte and Beyond by Peter Johnson, in which he describes the “changing motif” on gravestones through the centuries – and there are fourteen photos in the paper!

Three papers were published in acknowledgement of Ontario Heritage Day in February, and they were - Family History of a Caribbean Canadian by Dr. Jerome Teelucksingh, in which he traces the life of Tom Ashby; Why and When Had Mary Ann and Joseph Whiteley Moved to Grey County by Catherine Whiteley, in which she traces the life of George Forbes; and Hunting for Hidden History: How Slavery Came to the Town of York by Hilary Dawson, in which she write an account of slavery in York Township.

One other paper, Letters Home: Upper Canada to England by Dr. Bill Mills, give a very gripping account of a homesick Christopher Stokes writing home to his family in Nottinghamshire, England.

Families is available only to members of the Ontario Genealogical Society. There are two membership packages available – a six month term for $35.00, or a full year for $60.00. Memberships are available at www.ogs.on.ca/membership.php

Full issues of Families, including an index, is also available for the years 1962 to 2006 through the “Members Only” portal at
www.ogs.on.ca/membersonly/mem_sign_in.php.
Posted by Elizabeth Lapointe at 8:24 AM No comments: Links to this post