Joseph 'Joe' Schuster (1914-1992), a cartoonist in Toronto, moved to Cleveland, Ohio at the age of nine. Later, he met Jerome Siegel, and together, they co-created Superman, which first appeared in the June 1938 edition of Action Comics.

To read more, go to https://en.wikipedia.org/wiki/Joe_Shuster 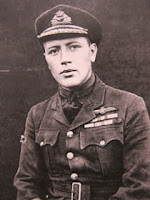 On July 8, 1917, three Canadian pilots in Britain’s Royal Naval Air Service (RNAS) were awarded military decorations. The pilots – Raymond Collishaw, John Sharman, and Ellis Reid – were members of the Black Flight, whose successes in the First World War were legendary.

To read more, you can go to http://www.pc.gc.ca/apps/cseh-twih/index_e.asp

Caribou badge: St. John's street signs changed to honour WW I history
http://www.cbc.ca/news/canada/newfoundland-labrador/caribou-badge-st-john-s-street-signs-changed-to-honour-ww-i-history-1.3135524
In a project to honour the soldiers and wartime service of the Royal Newfoundland Regiment, the image of the caribou on the regimental badge — is now affixed to the signs of more than three dozen of the city's streets.

READER’S CORNER: Nova Scotia must mark Black Battalion centenary
http://thechronicleherald.ca/letters/1297855-reader%E2%80%99s-corner-nova-scotia-must-mark-black-battalion-centenary
In a little less than a year, one of the most significant dates in Nova Scotia black history will be upon us: the centennial of the commissioning of Canada’s first and only black battalion, the No. 2 Black Construction Battalion of the First World War.

Heritage wharves along St. John River running out of cash
http://www.cbc.ca/news/canada/new-brunswick/heritage-wharves-along-st-john-river-running-out-of-cash-1.3144645
More than 60 people turned out to a public meeting in Long Reach on Wednesday evening to discuss the future of two heritage steamboat wharves in the area.

Quebec City nuns find business solutions
http://www.thestar.com/news/canada/2015/07/02/quebec-city-nuns-find-business-solutions.html
Compared to founding the province’s health system, the current project of the Order of the Augustinian Sisters of the Mercy of Jesus of Quebec — setting up a boutique hotel on the grounds of their monastery — shouldn’t be a problem.

The St. Sixte Catholic Church, established in 1885, was in the village of Saint Sixtus, north of Thurso, in the Outaouais.

Montreal Jazz Fest entrusts private archives to BAnQ
http://www.cbc.ca/news/canada/montreal/montreal-jazz-fest-entrusts-private-archives-to-banq-1.3132031
Montreal's Bibliothèque et Archives nationales du Québec announced on Monday that it has acquired the archives of the Montreal International Jazz Festival.
It is one of the library's largest private collections, with 2,660 videos and upwards of 1,800 hours of listening material.

Renovation of Senate's temporary home $29M over budget
http://www.cbc.ca/news/politics/renovation-of-senate-s-temporary-home-29m-over-budget-1.3135855
Fixing up a temporary home for the Senate has gone over budget by at least $29 million, and Public Works wants to squeeze office-relocation costs for senators to make up the difference.

Oliver Anderson: Canoeing into Ottawa history
http://ottawacitizen.com/news/national/oliver-anderson-canoeing-into-ottawa-history
Spring log drives were once the defining activity on rivers in the Ottawa watershed, because the city we think of as a government town was the logging centre of the world in the 19th and into the 20th century. Canoe trippers have a unique opportunity to see this history first-hand on the landscapes of Ottawa’s tributary rivers.

126-year-old Brantford-built bike salvaged by collector
http://www.brantnews.com/news-story/5709516-126-year-old-brantford-built-bike-salvaged-by-collector/
At the 14th annual Canadian Vintage Bicycle Show – hosted at a farm on Tutela Heights Road on Sunday – Rick Wolfe proudly displayed an 1889 Goold Bicycle Company bike that he saved from the landfill in Ottawa this past December.

GENEALOGY WITH JANICE: Discover the scoundrels, criminals and black sheep in your family tree
http://www.insidetoronto.com/news-story/5702358-genealogy-with-janice-discover-the-scoundrels-criminals-and-black-sheep-in-your-family-tree/
No one wants a criminal at the dinner table, but finding one in your family tree can add pizzazz to an otherwise boring list of names and dates.

Wilfrid Laurier to house 22 life-size statues of Canadian PMs
http://www.cbc.ca/news/canada/kitchener-waterloo/wilfrid-laurier-to-house-22-life-size-statues-of-canadian-pms-1.3132952
A controversial proposal to erect 22 life-size statues of Canada's prime ministers has found a home on Wilfrid Laurier University's Waterloo campus after being rejected for Kitchener's Victoria Park over a year ago.

Canadian Mosaic Project: Picture this
http://www.comoxvalleyrecord.com/news/310799891.html
Forty-six-year-old Tim Van Horn visited Vancouver Island in June for the second time in the past seven years, adding more touches to his Canadian Mosaic Project, which will be unveiled during Canada’s 150th birthday celebrations, in 2017.

I have seen that church a number of times that I have driven the Quebec countryside, and now it and it's archives are all gone. Just think of the memories that went up in smoke.

And how many genealogies have been lost in the fires that have ripped through the provinces of Saskatchewan, Alberta, and British Columbia? We dare not think.

There are lots of commercial companies that can help you to keep your genealogy safe once it is finished, but don't forget to put it in the cloud while you are working on it at home.

That way it stays safe and secure while you are working on it. If your hard drive should fail, it will be held for you.

I work mostly in Goggle now. It took awhile to adopt it, but I have accepted it now, and anytime you visit me, you will see that I am using Google to do almost everything.

So give it a try.

Go to http://google.com to see how you can use it. The service is free to everyone who uses it.

It’s the ONLY news blog of its kind in Canada!
Posted by Elizabeth Lapointe at 12:30 AM 1 comment: