On Sunday afternoon, at the closing of the BIFHSGO conference, a spirited panel discussion entitled, "Future Trends in Family History and Genealogical Research", was chaired by Glenn Wright. 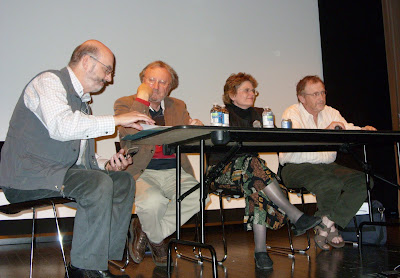 L to R: Glenn Wright, Moderator, with panelists John D. Reid, Colleen Fitzpatrick, and Bryan D. Cook
Colleen brought up two points - you can't stop technology, and that the people who don't get with the program (newer technology) will eventually die out because this is where it is all heading.

Bryan said he see changes in four areas of genealogy -

He thinks that data will continue to go online as free and pay-per-view, that fee-based services will continue to increase and the market expand, that DNA testing will pick-up even more, and that people will go on telling the stories of their ancestors, but worries about who, or what service, will be available to safeguard the stories for the telling.

John said that he sees the next big thing on the horizon as the machine-read digitization of newspapers.

"If civil registration and census online was wonderful progress, digitized newspapers are, or will be, a revolution," he said.

You can read the full text of his remarks on his blog, <http://anglo-celtic-connections.blogspot.com/2009/09/future-of-family-history.html>.

He noted that none of the local newspapers have been digitized - those held by the Library and Archives Canada - but there is always hope!

There were about 150 attendees taking part, and when question time came, there were lots of questions.

The audience seemed generally affected by the discussion, and were concerned by the not being able to attract new members to the societies, and what they would do with their work of family histories after they had finished with them.
Posted by Elizabeth Lapointe at 7:54 PM No comments: