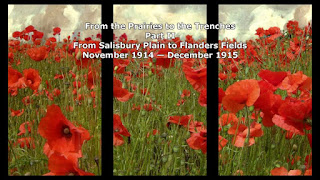 There is an video exhibit at the Saskatchewan Archives called From the Prairies to the Trenches – From Salisbury Plain to Flanders Fields, November 1914 – December 1915. It explores the events of 1915 at the front and at home in Saskatchewan.

The video exhibit highlights the training of Saskatchewan volunteers of the First Canadian Contingent in Great Britain, their deployment to the Front in the spring of 1915 and their involvement in the battles of that year, including The Second Battle of Ypres.

The exhibit also describes the pressures of the war on the home front, in particular, the growing demand for women’s suffrage which was intertwined with the province’s temperance movement.

Two video installation locations are available, in the main foyer at the Legislative Building and on the second floor of Government House.

Or you can view it at archives' YouTube channel at https://www.youtube.com/watch?v=iaylaT5EZAM

The website of the Saskatchewan Archives is at http://www.saskarchives.com/

Check the Canadian Week in Review (CWR) every Monday morning for the latest in Genealogy, Heritage, and History news in Canada.If you missed last week’s edition, it is athttp://genealogycanada.blogspot.com/2015/08/canadian-week-in-review-cwr-10-august.html