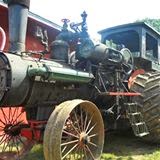 This year, an unique show will be held at the 60th annual Manitoba Threshermen’s Reunion & Stampede from today until the 27th of July at Austin, Manitoba.

• Live daily presentations of Life in the Trenches for a First World War soldier at 11 am and 3:30 pm

• Displays of the current and heritage capabilities of Canada’s Armed Forces from 1 RCHA and 2 PPCLI from CFB Shilo.

You can go to the Facebook page at https://www.facebook.com/mbagmuseum
Posted by Elizabeth Lapointe at 6:34 AM No comments: