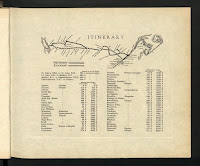 In 1860, Edward, Prince of Wales (later King Edward VII) arrived in Montreal during a tour of British North American colonies.

To read about King Edward VII, go to https://en.wikipedia.org/wiki/Edward_VII

Visitors to Winnipeg's Assiniboine Park Zoo can soon learn about heavy horses, the "gentle giants" that had a prominent role in Manitoba's early history, at a new exhibit opening next week.

The occasion was the official opening of the new community hall in Black River, a hall that sprang from the ashes when the former school that had been standing for well over a century burned to the ground.

To my surprise, Black River isn’t profiled in the book, at least not under that name. Yet a couple of Kings County communities are profiled that either don’t exist or were never officially recognized as communities. Etna and Vesuvius are two such communities that come to mind.

Four centuries ago, the first Mass west of Quebec was celebrated in the Huron-Wendat village of Carhagouha. On Aug. 15, Toronto's Cardinal Thomas Collins returned to that spot to mark the 400th anniversary of the event.

A new book recounting Samuel de Champlain's portage routes through Peterborough is about to be published, 400 years after the French explorer's travels here.

Finding Champlain's Dream was co-written by Elwood Jones, the archivist with Trent Valley Archives, along with Alan Brunger and Peter Adams.

This is an article about the squatters' villages which sprag up during the building of the Rideau Canal in Ottawa.

It's nearly incomprehensible that 25 months after the opening of the bridge on Circle Drive South, with another two bridges expected to be built within three years, city council is still struggling to come up with an easy way to name Saskatoon's iconic structures that goes beyond a prosaic geographical description.

There has been quite a few changes at the Ontario Genealogical Society over the past couple years, and now there is a change of what you see at their blog.

In years past, it use to be the place where the news was posted, now, since March of this year, it is the place where you go to learn how to do Ontario genealogy. The news have been moved to the Facebook page.

So far the following articles have been posted -

Using the “Between” Records – County and City Directories

Making a Connection between Official Records

Men of the “Cloth”-Tracking Records for Preachers, Pastors and Priests

Who is She Actually? How Names Can Change in a Person’s Lifetime

So You Think That You Have a Brickwall- Part 1

So You Think That You Have a Brickwall-Part 2

So You Think You Have a Brickwall- Part 3

The Personals- More Than You Wanted to Know

What do you of a society using their blog to post research articles? Have you found these articles helpful?

Check the Canadian Week in Review (CWR) every Monday morning for the latest in Genealogy, Heritage, and History news in Canada.If you missed last week’s edition, it is athttp://genealogycanada.blogspot.com/2015/08/canadian-news-in-review-cwr-03-august.html


It’s the ONLY news blog of its kind in Canada!
Posted by Elizabeth Lapointe at 12:30 AM No comments: Links to this post