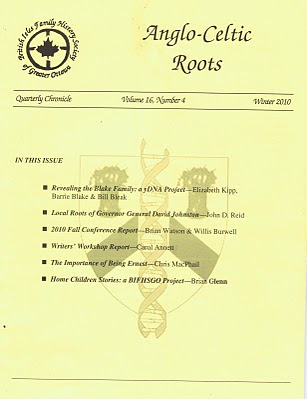 "The cover image combines the Coat-of-arms for the Blakes of Wiltshire/Hampshire/Somerset, England, (courtesy Elizabeth Kipp) with an image of a DNA helix (Wikipedia: National Human Genome Research Institute)"

I wasn't able to go to the December 11th meeting because of work commitments, but my dear husband dropped in for a minute and picked up the latest copy of Anglo-Celtic Roots, the award-winning quarterly publication of BIFHSGO (British Isles Family History Society of Greater Ottawa).

In this issue are three articles, a review of their annual Fall Conference held in September, news on the Home Children Book Project by Brian Glenn, the passing of long-time BIFHSGO member (and former president) and ACR columnist ("The Printed Page") Gordon Taylor, and a report of the writer's workshop by Carol Annett, which was also held during the Conference.

As well is "The Bookworm" by Betty Warburton, listing new holdings (with some interesting titles) for the Brian O'Regan Memorial Library, the "Members' Surname Search" by Elizabeth Kipp, a membership report by Tara Grant, a message from the president, Glenn Wright, and a note from the editor.

The first article by Elizabeth Kipp, Barrie Blake, and Bill Bleak — "Revealing the Blake Family - a yDNA Project" — looks into how the surname of Blake originated. It follows through the yDNA process, and outlines the ongoing research.

If you have questions about the Blake surname, Elizabeth can be reached at kippeeb@rogers.com.

Although the Library and Archives Canada does not have some of the newspapers which could have BMDs in them, he does find the newspaper at the local library, and starts to trace back the family.

If you are researching relatives in the 20th century, this is an excellent article (with detailed endnotes) to read.

The third article is a "Great Moments" article by Chris MacPhail (the editor of ACR) who writes about his great-aunt Lillian and the surprises he found in "The Importance of Being Ernest".
Posted by Elizabeth Lapointe at 9:17 PM No comments: