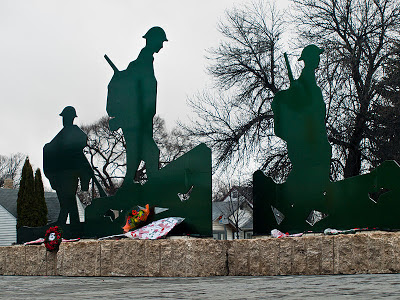 Valour Road (a west-end street in Winnipeg, Manitoba) was originally known as Pine Street, and three men from the 700 block of the street—Corporal Leo Clarke, Sergeant-Major Frederick William Hall, and Lieutenant Robert Shankland—all received Victoria Cross Medals as a result of the First World War.

Recently, the Canadian War Museum received all three medals, and they are on display at the museum. They will be on loan to Manitoba in 2014 when Canada commemorates the 100th  Anniversary of the beginning of the First World War.

Valour Road Victoria Cross Medals Find New Home at War Museum - www.winnipegfreepress.com/breakingnews/Valour-Road-Victoria-Cross-medals-find-new-home-at-war-museum-177329951.html The online edition of the Winnipeg Free Press reports that the collection was completed with the recent acquisition of the medal awarded in 1915 to Company Sergeant-Major Frederick William Hall.

By reading the information, I learned where many English women came to Canada after the First World War, which I never knew about before seeing this website.

Question of the Day: In what year was the name of Valour Road given to Pine Street in Winnipeg? Send your answer to Elizabeth at genealogycanada@aol.com by midnight, Eastern Standard Time. Please put “booklet” in the title, and remember to submit your full name and postal address. A winner will be chosen by random draw from every eligible entry received.