If you have Acadian roots or connections in Summerside, PEI, your family may go back several centuries, and you should attend the Historic Acadian Families of Summerside, which is a summertime series of talks by Jean Bernard (presented in English). The eight most familiar Acadian family names of Summerside are Arsenault, Aucoin/Wedge, Bernard, DesRoches, Gallant, Gaudet, Poirier/Perry and Richard.

Genealogist and author Jean Bernard will speak on these family histories at the Lefurgey Cultural Centre, 205 Prince Street on Wednesdays July 10, 17, 24 and 31 and Thursdays July 11, 18, 25, and August 1. All presentations will be in English and begin at 10:00 a.m. lasting for 60 to 90 minutes with lots of time for questions and answers.

Each talk will feature a 'primary concentration' on a surname and the talks will be presented in 'alphabetical order'. Invariably the discussion will 'stray' onto other connected names, but the intention is as follows:

July 10 is primarily about Arsenault

July 11 is primarily about Aucoin/Wedge

July 17 is primarily about Bernard

July 18 is primarily about DesRoches

July 24 is primarily about Gallant

July 25 is primarily about Gaudet

July 31 is primarily about Poirier/Perry

August 1 is primarily about Richard

Space is limited. Please contact Fred Horne at 432-1332 fredhorne@wyattheritage.com for more information or if you wish to reserve a seat. Admission is by donation.

The Culture Summerside's MacNaught History Centre and Archives is at  www.wyattheritage.com/mainsite3/macnaughthouse.asp
Posted by Elizabeth Lapointe at 4:13 PM 1 comment:

Save Our Heritage Lighthouses 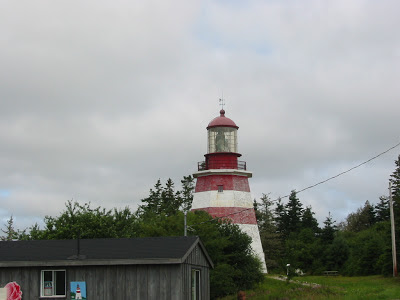 Lisa Bastien—the Constituency Assistant–Outreach of the Office of Malcolm Allen, NDP M.P. for Welland, Ontario—asked for my help yesterday in spreading the word about saving out heritage lighthouses.

The message says, in part - “In 2010 the Conservative Government identified nearly 1000 lighthouses across Canada as surplus – meaning that these lighthouses are not active or they could be replaced by a simpler structure such as pole with a light on top as a cost-saving measure.

The Department of Fisheries & Oceans gave the provinces and communities groups 2 years to send in petitions and submit business plans to save their local lighthouses. As of May 2013, only 128 plans have been received, and the future of over 800 lighthouses are unknown. There are lighthouses in every province and territory at risk."

We think that the Conservatives need to stand up and protect our Maritime Heritage and work with the provinces/territories and local community groups to ensure that these lighthouses remain as beacons of navigation and history along our coastlines rather than downloading the coast onto others.

If you would like to know if there is a surplus lighthouse in your riding, please contact our office at 905-788-2204, or at malcolm.allen.c1a@parl.gc.ca".

A PDF copy of the petition is available by writing me at genealogycanada@aol.com. (I received a copy of the original Word file, but I can't post it for download from my blog.)

Personal Note: Lighthouses are dear to me because my great-great-grandmother spearheaded the project of building the lighthouse on Seal Island off of the southwest coast of Nova Scotia. Her name was Mary Hitchens.

In later years, her descendant, Walter Hichens, from Bethel, Maine, spent many summers on Seal Island, and eventually had one lighthouse built at Barrington Passage. You can visit it today, and learn the story of Mary Hitchens.

And, I'm pleased to note, the Canadian Coast Guard named a ship after her.
Posted by Elizabeth Lapointe at 12:30 AM No comments: