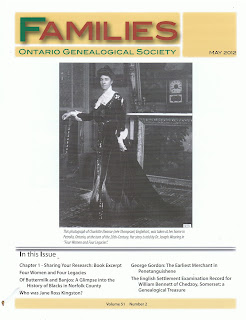 Being the editor, I am really proud of this issue, because it is all about Sharing Your Family History!

The first article is Four Women and Four Legacies by Dr. Joseph Wearing.

The paper tells the history of the four Thompson women who were from Ireland, and who eventally lived in London, and Petrolia, Ontario.

Dr. Wearing shows us how to research and use wills, and property transcripts to trace female ancestry of our family. A thoughtful, exciting read!

Guylaine Petrin comes back with another paper entitled Who Was Jane Ross Kingston?, and she takes us to court and burial records in Upper Canada to prove who she really was - or wasn't.

As I noted in my editoral "Once again, she shows that using court records can bring much of family history to life, and goes a lomg way in proving the existance of a person".

Another paper in this issue is Of Buttermilk and Banjos: A Glimpse into the History of Blacks in Norfolk County in which the former archivist of the Eva Brook Donly Museum and Archives,  Scott Gilles, takes us to daily like as it was lived by Black Canadians in the mid-1800s.

Gwen Patterson in her column Where Are Those Records? writes about George Gordon, the earliest merchant- in Penetanguishene, and Brooke Skelton in her paper The English Settlement Examination Record for William Bennett of Chedzoy, Somerset in which a chance reading of a certain document in an archives solved a huge genealogical problem.

The next issue of Families will be released the first week in August, and it will feature the First Prize winner in the Keffer Essay Contest - Virginia Reid with the paper How an Old Handkerchief Helped Me, the First Prize of the Dr. Don Brearley Student Essay Award which is William Vollmer with his paper A Mastery Like No Other, and a real exciting paper The Family of Jacob Phillips and Sarah "Sally" Kaaka of Etobicoke: An Overview by Dave Phillips.

The site of the Ontario Genealogical Society is http://www.ogs.on.ca/.