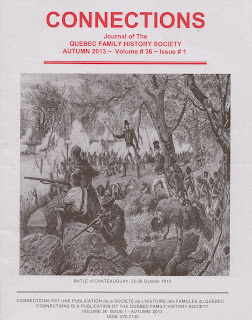 The fall issue of the Connections journal has been sent out by the Quebec Family History Society located in Montreal.

There are many short articles in this issue, and they are –

The Farnsworth/Phaneuf Connections by Rene E. Peron in which the author writes about the connections between the two families going back 300 years.

Pilgrimage for Bert: Remembering the 1st Anti-Tank Regiment, 1st Canadian Divison by Shelia Snow Wilkins in which Wilkins writes about the trip she and her husband took to Sicily this past summer to visit the places where her father fought in the Second World War.

Ouellette also has written an article on The Battle of Chateauguay (the cover has the photo of the painting of the battle) as it has been 200 years since the Canadians fought the Americans on the shores of the Chateauguay River in October 1813.