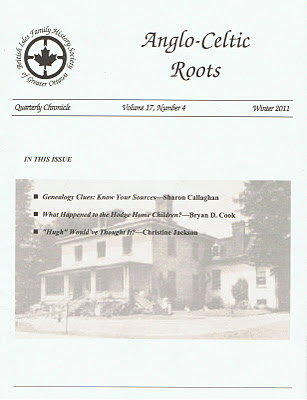 The first article in the Winter 2011 edition of Anglo-Celtic Roots, the newsletter of the British Isles Family History Society of Greater Ottawa (BIFHSGO) www.bifhsgo.ca, belongs to Sharon Callaghan.

While reading through "Genealogy Clues – Know Your Sources", I discovered that it is the first time I have seen Quebec records explained in this way. (This is important to me. Although my husband has had his genealogy done as far as BMDs are concerned, the article goes way beyond that, with additional records).

I will be taking this copy of Anglo-Celtic Roots with me when I go to Quebec City later this year to do more research on my husband's genealogy.

Other articles include "What Happened to the Hodge Home Children?" by Bryan D. Cook; "'Hugh' Wouldn't Thought It?" by Christine Jackson; "The Cream of the Crop" by John D. Reid; and "The Bookworm" by Betty Warburton.

As usual, another great issue!
Posted by Elizabeth Lapointe at 6:00 AM No comments: