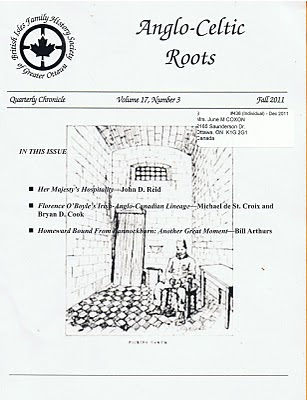 While the Conference is going strong, I took a few minutes earlier this week to write down some notes from the Fall 2011 edition of Anglo-Celtic Roots, BIFHSGO's newsletter.

It should be noted that Jean Kitchen is the new Editor of the newsletter, having taken over from Chris MacPhail.

One of the articles, Her Majesty's Hospitality, by John D. Reid, is about the everyday life in the Coldbath Fields Prison where his great-grandfather spent a four-month sentence for embezzling 30 pounds from his employer – the London and County Bank Branch on Oxford Street in London.

John went to the London Metropolitan Archives, looked through the files, and discovered what life was like for his great-grandfather while at the prison.

Michael De St. Croix and Bryan D. Cooke have written a 6-page article on Florence O'Bayle's Irish-Anglo-Canadian Lineage (Michael's grandmother) to try and produce the correct genealogy of her life in England before she came to Canada, - and once here, her marriage to W. T. Tully, a railway executive.

Elizabeth Kipp returns again to bring us up-to-date with the yDNA results of the Blake family. The yDNA test now shows that there were two Theophilus BLAKEs, and the family is descendant from the Blake who emigrated from the British Isles in 1745, was located at Chester County, Pennsylvania, and by 1764 was living in Bath County, Virginia, and not from the other Theophilus Blake, who lived in New Hampshire.

The fourth article by Bill Arthur tells the story of how the Arthur and Hamilton families crossed in Ireland, back in the 14th Century, and how he awaits more surprises as a newly-discovered researcher enters the picture.

You can read the story in his article Homeward Bound from Bannockburn: Another Great Moment.

The website for BIFHSGO is http://www.bifhsgo.ca
Posted by Elizabeth Lapointe at 6:00 AM No comments: