The Maple Leaf Tartan was created in 1964 by David Weiser in anticipation of the 100th anniversary of Canada's confederation in 1967.

The colours represents the changing seasons of the maple leaf as the pattern incorporates “the green of the leaves' summer foliage, the gold which first appears in the early autumn, the red which appears with the coming of the first frost, and the brown tones of the fallen leaves. The design proved to be very popular throughout Canada”.

The Maple Leaf Tartan was made an official national symbol by ministerial declaration on March 9th, 2011.
Posted by Elizabeth Lapointe at 4:01 PM 2 comments: Links to this post 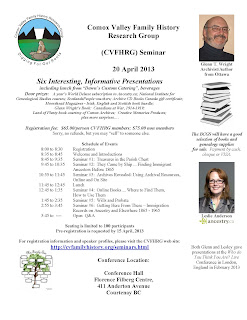 The speakers will be Glenn Wright and Lesley Anderson, both from Ottawa.

Some topics to be covered will be They Came by Ship ... Finding Immigrant Ancestors Before 1865, and Getting Here From There – Immigration Records on Ancestry and Elsewhere 1865 – 1965.

You may go to www.cvfamilyhistory.org/seminars.html
Posted by Elizabeth Lapointe at 8:31 AM No comments: Links to this post