Statement by the Prime Minister of Canada on National Flag Day 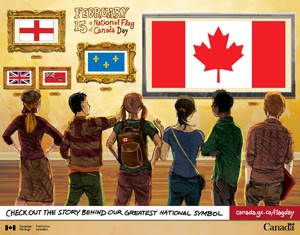 “The Canadian flag is an inspiring and endearing symbol that unites Canadians from coast to coast to coast. It is equated both at home and abroad with a peaceful and progressive country of enormous natural beauty, prosperity and generosity of spirit. At no time is national pride in our flag more evident than during the Olympic Games, and it is certainly on prominent display in Sochi over so many podiums and around so many of our magnificent athletes. We could not be more proud.

“In keeping with the recent tradition of presenting a Peace Tower flag to deserving Canadians, I am deeply honoured to present this symbol of our country to Gordon Burke and Jan Phelan, parents of the late Sarah Burke, who are accompanied today by widower Rory Bushfield. Sarah was a gifted athlete, a trailblazer in freestyle skiing, and one of the principal reasons why the half pipe was introduced as an Olympic sport this year in Sochi, Russia. She was a great Canadian whose efforts have had a remarkable impact on the world of sport, and whose story has touched the nation. Her legacy will live on in the many athletes who take up the sport she so championed.

“On this day, I invite all Canadians to take a moment and reflect on our national icon and what it means to be Canadian.”

February 15 was declared National Flag of Canada Day in 1996. To celebrate this special day in Canadian history, each year the Peace Tower flag is presented to a Canadian who has exemplified the values our country holds most dear.

Posted by Elizabeth Lapointe at 1:51 PM No comments: Links to this post

Acceptable projects will contribute to the knowledge of genealogical techniques and to the knowledge of genealogy relating to names, places, dates and family histories. This can include creating publications, developing databases, digitization of archival material collections, hosting training sessions and workshops, and the preservation of archival material collections. This grant is not meant to fund employees, or other in - house labour wages , but can be used to contract services and goods.

Only non - commercial entities may apply for this grant money including, genealogy societies, museums, archives, libraries, schools, historical societies, and community groups. An eligible applicant may submit more than one project proposal in any given year, and may apply in any year the grants are offered regardless of previous proposals or grants issued.

Successful applicants will be required to prepare and deliver a presentation related to their funded project at either a Branch Meeting or Ottawa Branch Conference. The support and funding given by the Ottawa Branch must be acknowledged with the logo, web address, and name of the Ottawa Branch of the Ontario Genealogical Society appearing on all promotional material and/or physical aspects related to all projects receiving funding. Successful applicants must agree in writing to these conditions.

Thanks to Gail Dever, Special Correspondent to Canadian Week in Review, for bringing this to our attention.

Posted by Elizabeth Lapointe at 10:46 AM No comments: Links to this post