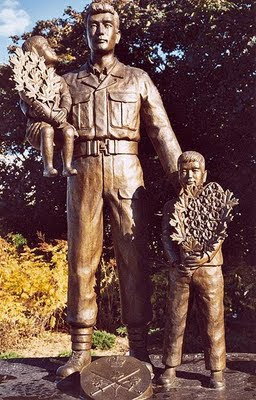 Photo Credit: Mario Lapointe CD
May the 3rd was the 58th Anniversary of the battle for Hill 187 during the Korean War by Canadians who fought in the 3rd Battalion of the Royal Canadian Regiment.

In marking the Anniversary, Prime Minister Stephen Harper says that "The Korean War, like all wars, was marked by both losses and triumphs. One most notable achievement, particularly for Canadians, was the Battle of Kapyong on Hill 677. April 24th, 2011 marked the 60th anniversary of the Battle of Kapyong, a battle in which the 2nd Battalion Princess Patricia's Canadian Light Infantry defended the front line against enemy forces that greatly outnumbered the Canadians. The Battle of Kapyong in April 1951 earned the brave Canadians a United States Presidential Citation for their undeniable valour".

Some of the websites which talk about the Korean War are -

www.korean-war.com/canada.html This site provides a good, basic account of the war, and the Canadians action in it.

www.kvacanada.com/canadians_in_the_korean_war.htm The site goes into detail about the Canadian action in the Korean War by the Korea Veterans Association of Canada Inc. It has the awards and medals won by Canadians, and the Wall of Remembrance in Brampton, Ontario.

www.veterans.gc.ca/eng/sub.cfm?source=history/koreawar The website breaks down the war into the battles.

To look at the Remembrance Book of those who died in the war, go to
www.veterans.gc.ca/eng/sub.cfm?source=collections/books/bkorea.
Posted by Elizabeth Lapointe at 8:12 AM No comments: