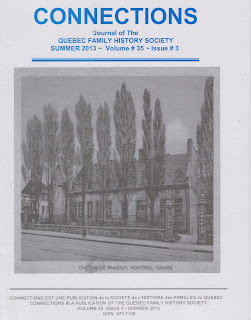 The summer issue of the journal of the Quebec Family History Society called Connections have just been released, and it’s full of articles, and other newsy bits of information.

In this issue, there is an article by Mark W. Gallop entitled Downton Abbey and Its Predecessors in which Mark discusses the role that the Whiteoaks of Jalna and Downton Abbey has played in convincing him to follow the life of a genealogist.

Henry’s Story by Peter Sampson tells of how he found Henry Sampson from Quebec City who has died in a shipping accident along the coast of Portugal in 1913.

The news in this issue is that the QFHS can now announce that they have signed an agreement with FamilySearch to become an affiliate with the library. You can now order microfilm and microfiche from the LDS library in Salt Lake City, and can read them at the QFHS library.

They have the latest books that have been received at the library, genealogical software, and the latest events in their public lecture series.

To go to their website, go to http://www.qfhs.ca
Posted by Elizabeth Lapointe at 8:22 AM No comments: Links to this post