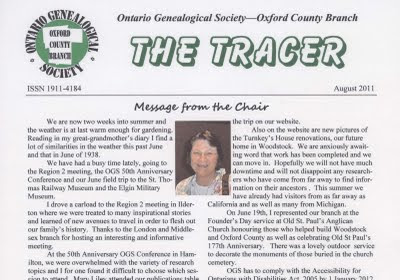 The August edition of The Tracer from the Oxford County Branch of the OGS arrived this week, and as usual, is a very "newsy" newsletter.

Another article, "Margo Kidder – The Oxford Connection"wonders when the episode of "Who Do You Think You Are?" (Canadian version) program aired a couple of years ago featured Margot Kidder. They followed her maternal grandparents, John "Jack" Wilson and Ruth Pyne Wilson, but the writer wonder why they didn't follow her great-grandfather, Charles A. Pyne and Ruth Helen Pyne, for they would have led the viewers to Oxford County, instead of to British Columbia.

Conference 2011 are covered in pictures, Fall Meetings are in the newsletter, and they are starting a new feature called "The Treasure Chest: A look at the family heirlooms of our members". The first person which brought in pictures of her family was Marilyn Whyley.

The Ontario Genealogical Society is offering a half-year membership for $35.00 until the end of 2011. You can find out more by going to http://www.ogs.on.ca/membership/types.php
Posted by Elizabeth Lapointe at 7:07 AM No comments: Links to this post