February 1, 1799 - Royal Assent is given by the British government to change the name of Île St- Jean to Prince Edward Island. It was named after George III’s son – Prince Edward Augustus.
To read more, go to http://en.wikipedia.org/wiki/History_of_Prince_Edward_Island

February 1, 1854 - Fire destroys Parliament Buildings at Montreal, Québec. The government is transferred to Toronto, and from there, it will be transferred to Ottawa in 1867.
For more, visit http://en.wikipedia.org/wiki/Burning_of_the_Parliament_Buildings_in_Montreal

February 2, 1800 - Massachusetts farmer Philemon Wright—attracted by offers of free land in Canada—leaves Woburn with 25 men, their wives, and 15 children to travel by sleigh to the Chaudière Falls on the Ottawa River. They founded Wrightstown, later known as Hull, and today, it is known as Gatineau, Quebec.
To read the full story of Gatineau, go to http://en.wikipedia.org/wiki/Gatineau

Second bid launched to dub Manitoba-Ontario area world heritage site
http://www.sunnewsnetwork.ca/sunnews/politics/archives/2015/01/20150126-192214.html
Ontario, Manitoba, five First Nations, and the federal government have teamed up again to have land on the east side of Lake Winnipeg declared a world heritage site.

The man who pointed the way to the Erebus: Louie Kamookak on searching for the Franklin expedition
http://news.nationalpost.com/2015/01/23/the-man-who-pointed-the-way-to-the-erebus-louie-kamookak-on-searching-for-the-franklin-expedition
Louie Kamookak, an amateur historian from the hamlet of Gjoa Haven, spent 30 years collecting oral histories from Inuit elders and comparing them to the journals of subsequent expeditions. He came up with a theory of where the ships might be found, one that gave the Parks Canada explorers a much better idea of where to start looking.

Portrait of Simcoe County's first judge ready to be unveiled after months of restoration work
http://www.orilliapacket.com/2015/01/25/portrait-of-simcoe-countys-first-judge-ready-to-be-unveiled-after-months-of-restoration-work
Sir James Robert Gowan's portrait is primed for its grand unveiling. Restoring the oil painting, which measures four feet by five feet, has been a costly venture for the Barrie Historical Association (BHA) – at nearly $18,500, including tax.

On Vimy Ridge, mighty oaks will grow again — thanks to a Canadian soldier
http://www.thestar.com/news/gta/2015/01/24/on-vimy-ridge-mighty-oaks-will-grow-again-thanks-to-a-canadian-soldier.html
No trees were left standing in the aftermath of a bloody battle that defined the Canadian effort in the First World War. Thanks to a Canadian soldier and his passionate friend, that’s about to change.

Canadian History Ehx: A look back at St. Andrews Ceylon
http://www.grenfellsun.sk.ca/Community/2015-01-25/article-4019979/Canadian-History-Ehx%3A-A-look-back-at-St.-Andrews-Ceylon/1
The church was officially built in 1889, and was consecrated by Bishop Anson. Donations to build the church came from across the area, and as far away as England.

Chinese historical sights sought in Richmond
http://www.richmond-news.com/news/chinese-historical-sights-sought-in-richmond-1.1740876
Do you know of a historically significant place in Richmond connected to the Chinese community? If the answer is "yes", the B.C. government wants to know so it can be formally recognized for its heritage value. 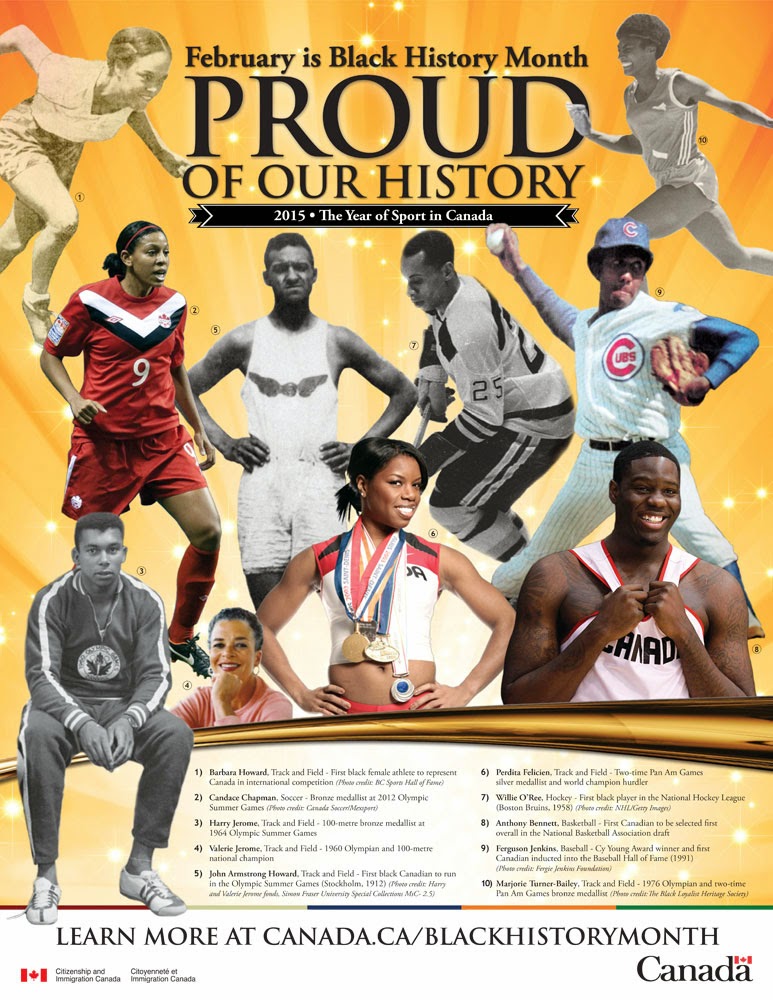 This year, the Governor General has declared 2015 as the Year of Sport in Canada, and Black History Month has taken the opportunity to spotlight Canada’s black athletes as they have performed on the international stage.

I have a bit of common history with one of the people that Heritage Canada highlights at
http://www.cic.gc.ca/english/multiculturalism/black/photo-sports.asp#a10, and that is Marjorie Turner-Bailey, who won two bronze medals at the 1975 Pan American Games in Mexico City (100 metres, 4x100-metre relay) in track and field, and went on to represent Canada at the 1976 Olympic Summer Games in Montreal.

How many people know that she used to train in the summer by running on the mile-long Crescent Beach that is part of the causeway that leads to her hometown of Lockeport, Nova Scotia? I grew up in the area, and it was always a proud thing to know Marjorie, and follow her career.

You can read all about Black History Month at http://www.cic.gc.ca/english/multiculturalism/black/index.asp

And for something completely different, I would like to wish everyone a Happy Groundhog Day!

Did you know that the tradition of our Groundhog Day comes to us from Germany? The Germans believed that the badger (their version of our groundhog) had the power to predict the coming of spring. They even watched the badger to know when to plant their crops.

February 2 is Groundhog Day in Canada, and although we don’t use it to predict when to plant our crops, we use it to “indicate’ if there will be six more weeks of winter (if he sees his shadow), or six week to spring (if he does not see his shadow).

Groundhog Day became popular in Canada, as it is today, when, in 1956, Wiarton Willie, from Wiarton, Ontario, became a household name. A festival grew up around him, and today, it is one of the largest winter festivals in Bruce County, Ontario.

Since then, other celebrity groundhogs have popped out and joined Willie from other parts of Canada, including Schubenacadie Sam from Nova Scotia, Gary the Groundhog in Ontario, Brandon Bob in Manitoba, Fred la Marmotte in Quebec, and Balzac Billy in Alberta.

And I forgot to mention last week that on 25 January 1791, the British Parliament approved the Constitutional Act which separated the old province of Quebec into Upper and Lower Canada. Before 1791, Quebec was a colony from Labrador down to the present-day border with the United States at Detroit. After 1840, Lower Canada became Quebec, and Upper Canada became Ontario.

If you do, please go to my website, Elizabeth Lapointe Research Services, and see how I can help you find that elusive Canadian ancestor.

The next Canadian Week in Review will be posted 08 February 2015.
Posted by Elizabeth Lapointe at 12:30 AM No comments: