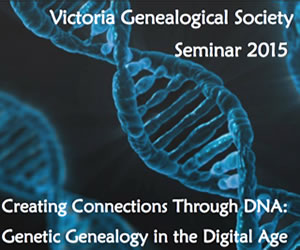 Merv Scott, the Project Director of the Victoria Genealogical Society (the one in British Columbia, Canada) writes to tell me that they have finalized their program for their Annual Seminar, and registration is now open at http://www.victoriags.org/seminar.php

They will have an impressive lineup of speakers to address this year's theme - Creating Connections Through DNA: Genetic Genealogy in the Digital Age.

Some of the speakers will be -

Barbara Johnson has a degree in Medical Microbiology, and has taught science both at elementary school and with Pacific Science Center

Wedlidi Speck, a hereditary chief of the Namgis First Nation, is Director of Aboriginal Service Change with the Ministry of Children and Family Development.

Merv says that “Some of your followers might like the idea of enjoying our beautiful fall weather. Combining a trip to Victoria and all it has to offer with a day of genealogy with like minded people - what could be better"?

It’s the ONLY news blog of its kind in Canada
Posted by Elizabeth Lapointe at 3:30 PM No comments: 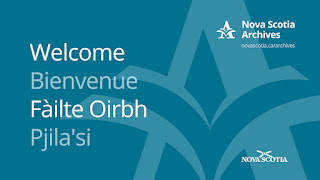 An additional 26,625 historical vital statistics have been added at www.novascotiagenealogy.com!

These records were released on 31 December 2014 and they have been digitized, fully indexed and checked for quality control.

As usual, the birth records include some 'delayed' entries for individuals born in 1914 (or earlier) but not registered until a later date.

The site is at https://familysearch.org/search/collection/2242825

The site is at https://familysearch.org/search/collection/2242886

The site is at https://familysearch.org/search/collection/2243378

If you are looking for an Nova Scotian ancestor, I would advise you to look through the entire section, because I have found births, marriages and deaths on each roll of microfilm, regardless if it says, for instance, Nova Scotia Deaths. Although, through FamilySearch, you do have direct access to the records, that may not be available elsewhere.

If you missed this week’s edition, it is at http://genealogycanada.blogspot.com/2015/06/canadian-week-in-review-cwr-29-june-2015.html