Just a reminder to watch the Google+ Hangout on Air tomorrow morning at 8:00 EDT when members at the Ontario Genealogical Society will be on a panel discussion about Social Media.

Go to https://support.google.com/plus/answer/2459411?hl=en to see how you join Google +, and to get to the site on Saturday morning, go to https://plus.google.com/u/0/events/cgkbikrmmec7hi1irnenf5jmqbc?cfem=1 you must be a Google member.

See you there!
Posted by Elizabeth Lapointe at 3:00 PM No comments:

Royal Tour of Canada this month 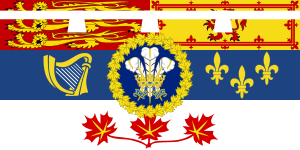 Personal Flag of the Prince of Wales for use in Canada

Their Royal Highnesses The Prince of Wales and The Duchess of Cornwall will tour Canada from May 18 to May 21, 2014. They will make four official stops in three provinces – Nova Scotia, Prince Edward Island, and Manitoba.

In Nova Scotia, they will visit

In Prince Edward Island, they will visit

Charlottetown, Prince Edward Island, (May 19 and 20)

Official Welcome to Canada and Nova Scotia at the Grand Parade in Halifax, Nova Scotia, on Victoria Day on May 19

Tour of Hector Heritage Quay—A Celebration of Celtic Appreciation Month in Pictou, Nova Scotia, on May 19

Fireworks, music, and performances to celebrate Victoria Day and the 150th anniversary of the Charlottetown Conference, which paved the way to Confederation in Charlottetown, Prince Edward Island, on May 19

Visit to Cornwall United Church in Cornwall, Prince Edward Island, on May 20

In Manitoba, they will visit

The children at the Stevenson Hangar as they learn about the principles of flight, rockets, satellites and more in Winnipeg Manitoba on May 21