Did you know that in 1864, a group of Confederate soldiers based in Canada attacked the town of St. Alban's, Vermont? The soldiers robbed a bank of $200,000 and killed one man in their escape. The incident strained Canadian-American relations already weakened by the events of the American Civil War.

To read more about the grain elevators, go to http://genealogycanada.blogspot.com/2014/10/peels-prairie-province-releases-grain.html
=============================================
In 1926, magician Harry Houdini—appearing at the Princess Theatre in Montreal—received a fatal blow to the stomach. When a McGill University student asked him if he could shrug off blows to the body; Houdini said “Yes”, but before he could brace himself, the blow was dealt. He died of a ruptured appendix 10 days later in Detroit.

To read more about this story, go to http://www.snopes.com/horrors/freakish/houdini.asp

(Video) Iconic Saskatoon hotel general manager set to retire
http://globalnews.ca/news/1630167/iconic-saskatoon-hotel-general-manager-set-to-retire
The Delta Bessborough is an iconic building in Saskatoon, and its general manger, Andrew Turnbull, will retire at the end of the month.
=============================================
(Video) The First World War: Excerpts from the diary of Woodman Leonard
http://www.ottawasun.com/2014/10/23/the-first-world-war-excerpts-from-the-diary-of-woodman-leonard
Read about Lt. Col. Leonard's observations during the week of March 20th.

Demolition crews dig up piece of naval history in Halifax
http://metronews.ca/news/halifax/1188486/anchor-a-wow-demolition-crews-dig-up-piece-of-naval-history-in-halifax-2/
The discovery of an anchor in Halifax’s dockyards believed to have belonged to Canada’s first naval warship. The director of the Naval Museum of Halifax said he’s “85 to 90 per cent certain” it belonged to HMCS Niobe, the first Canadian warship to enter the country’s territorial waters, on Oct. 21, 1910.

RBC Black History Month Student Essay Competition continues to grow in its sixth year
http://www.newswire.ca/en/story/1430406/rbc-black-history-month-student-essay-competition-continues-to-grow-in-its-sixth-year/
Students can now earn one of 20 scholarships, up from three, including grand prizes of up to $5,000 that will help make their someday a reality. The competition gives students an opportunity to learn about the contribution black people have made to Canadian history.

Windsor’s Hockey Heritage Museum shoots for expanded hours
http://thechronicleherald.ca/novascotia/1244887-windsor-s-hockey-heritage-museum-shoots-for-expanded-hours
The museum season now runs from June 15 to October 05, but during the pumpkin regatta, held Thanksgiving weekend, the tourist bureau in Windsor gets hundreds of inquiries about the hockey museum.

Genealogical journey yields results
http://www.orilliapacket.com/2014/10/17/genealogical-journey-yields-results
For Orillia resident Phil Jenkinson, his work following his genealogy led to the realization one of his relatives played a role in the First World War.

Union Gas donation will help with historic chapel restoration
http://www.napaneeguide.com/2014/10/23/union-gas-donation-will-help-with-historic-chapel-restoration
Union Gas presented a cheque for $20,000 to the committee that is fundraising to restore Her Majesty’s Royal Chapel of The Mohawks, located on Tyendinaga Mohawk Territory.

Royal Canadian Air Force squadron returns to RAF Leeming to take part in exercise for first time since it was based there in WWII
http://www.thenorthernecho.co.uk/news/11545048.Royal_Canadian_Air_Force_squadron_returns_to_RAF_Leeming_to_take_part_in_exercise_for_first_time_since_it_was_based_there_in_WWII/
A Royal Canadian Air Force squadron has returned to RAF Leeming more than 70 years after using it as a base during World War Two.

Park to celebrate Upper Fort Garry: A Significant part of Manitoba's history
http://www.winnipegfreepress.com/local/park-to-celebrate-upper-fort-garry-279699702.html
Friends of Upper Fort Garry unveiled the first of a three-phase development that will celebrate the fort's singular significance in the province's history.

Local honoured by Alberta Historical Resources Foundation
http://www.camrosecanadian.com/2014/10/23/local-honoured-by-alberta-historical-resources-foundation
The outstanding efforts of Alberta’s “heritage heroes” and the work of local organizations to preserve the province’s rich history were recognized October 16 with the announcement of the 2014 Alberta Historical Resources Foundation Heritage Awards. 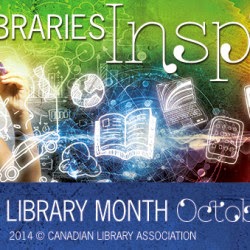 In October, the inspiration created in and by libraries is celebrated during Canadian Library Month with the theme “Libraries Inspire!”.

In Ottawa, we are fortunate to have many genealogical libraries in the city, and we should take advantage of them.

They hold maps, directories, books, and those ever so important family files that may hold clues to our ancestors, census, and cemetery records.