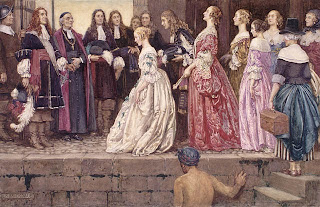 Arrival of the Brides Library and Archives Canada, Acc. no 1996-371-1
The Library and Archives Canada released this blog post yesterday -
"Summer 2013 marks the 350th anniversary of the arrival in New France of the first contingent of the “Filles du roi” (“King's daughters”), young women who became the ancestors of numerous French-Canadian families. A variety of celebrations are planned throughout Quebec, culminating in the New France Festival in Quebec City from August 7 to 11, 2013. The website is at www.nouvellefrance.qc.ca/index.php/en
Between 1663 and 1673, King Louis XIV supported the emigration of these young women, many of them orphans. Their passage to the colony was paid and they received an average dowry of 50 livres, along with a small hope chest containing clothing and sewing materials. In exchange, the women agreed to marry on their arrival in New France, to start a family and to help their husbands work the land. These women were instrumental in helping to populate and develop the colony.
The first contingent of 36 “Filles du roi” landed in 1663. Over the next ten years, an estimated 800 young women settled in New France under the same program.
If you would like to know whether one of your ancestors was a “Fille du roi,” there are many genealogical publications and reviews you can consult".
You can visit the website http://lesfillesduroy-quebec.org