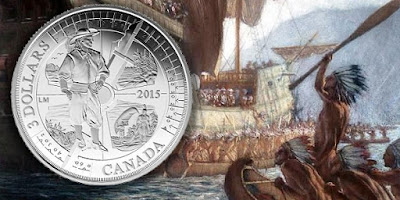 The Royal Canadian Mint issued this press release this week -


Four hundred years after French explorers led by Samuel de Champlain explored the territory that would become present-day Ontario, the Royal Canadian Mint has issued a silver collector coin celebrating the 400th anniversary of Champlain’s historic journey to Huronia. The coin was unveiled on June 11 in Ottawa, Ontario, during the official launch of the 2015 Festival Franco-Ontarien.

The reverse image of this 99.99% pure silver coin is designed by Canadian artist Laurie McGaw and is engraved to emulate the famed 17th-century astrolabe—long attributed to Champlain—found in Cobden, Ontario. Against this navigational tool is set a full-body portrait of Samuel de Champlain. Visible through the spaces between the astrolabe’s latitude and longitude crosshairs are engravings of scenes from Champlain’s journeys in Huronia, which also depict the Huron guides who were indispensable to his expedition. The unique reverse is engraved with the word “CANADA”, the date “2015” and the face value of “3 DOLLARS”. The obverse features the effigy of Her Majesty Queen Elizabeth II by Susanna Blunt.

The coin can be ordered directly from the Mint as of June 11 at 1-800-267-1871 in Canada, 1-800-268-6468 in the U.S., or on the Internet at http://www.mint.ca. The coin will also be available at the Royal Canadian Mint’s boutiques in Ottawa, Winnipeg and Vancouver, as well as through the Mint’s global network of dealers and distributors, including participating Canada Post outlets.

If you missed this week’s edition, it is at http://genealogycanada.blogspot.com/2015/06/canadian-week-in-review-cwr-08-june-2014.html

It’s the ONLY news blog of its kind in Canada!
Posted by Elizabeth Lapointe at 6:55 PM No comments: Links to this post 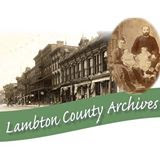 If you have First World War stories, then Lambton County Archives in Ontario wants to talk to you! You stories can still be incorporated into their exhibit Lambton At War.
As early as 1865, a volunteer company was formed to protect the Canadian border and Lambton County that it shares with Michigan and are separated by the St. Clair River.
In 1872, this Lambton regiment was given the name the St. Clair Borderers.
During the First World War, the Borderers supplied troops to the fighting fronts through the 70th and 149th Battalions. Men from towns such as Watford, Petrolia and Sarnia boarded troop transport trains and made their way to England were they went onto fight in the Somme, at Vimy and Ypres.
And many Americans who had Canadian parents who had migrated to Michigan enlisted in the Canadian Expeditionary Force in the First World War.
And do you know a story of someone who sewed bandages, scavenged war materials, or put together Red Cross kits? Or perhaps you know stories of men and women who stayed behind and contributed to the war efforts by working on farms or in factories and who have interesting stories to tell.
They have an online submission form at http://www.lambtonmuseums.ca/exhibit/lambton-war/986-2/
The website of the archives is http://www.lambtonmuseums.ca/heritage/
The Facebook page is https://www.facebook.com/LambtonCountyArchives
==============================================================

Check the Canadian Week in Review every Monday morning for the latest in Genealogy, Heritage, and History news in Canada.
If you missed this week’s edition, it is at http://genealogycanada.blogspot.com/2015/06/canadian-week-in-review-cwr-08-june-2014.html
It’s the ONLY news blog of its kind in Canada
Posted by Elizabeth Lapointe at 12:30 AM No comments: Links to this post