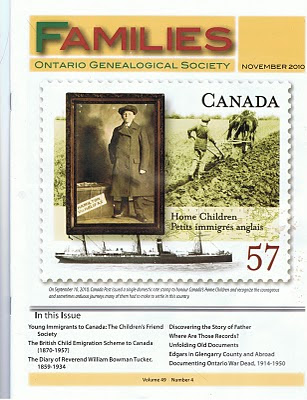 As the new editor of the Ontario Genealogical Society's journal, Families, I have had the pleasure of my first issue being recently released.

In this November 2010 issue, I covered the fact that 2010 was declared as the Year of the Home Child, and I published the following articles -

"The British Child Emigration Scheme to Canada (1870-1957)" by Perry Snow. Read about the legacy left by his father, Fred G. Snow, as he made his way to Canada as a Home Child. This article appears as a reprint courtesy of Chinook, the quarterly journal of the Alberta Family Histories Society.

'The Diary of Reverend William Bowman Tucker, 1859-1934" is an except from a diary of a Home Child, one who later went on to found the Montreal City Mission. Glenn Adams, his grandson, gave me his kind permission to reprint a small portion of the diary.

"Discovering the Story of Father" by John Fielding is a heart-warming story of a boy, Leslie Fielding, and how he made a life for himself after he came to Canada.

In the next posting, I will continue with Part II, telling you about more articles in this issue of Families, plus a special article in the OGS NewsLeaf.
Posted by Elizabeth Lapointe at 6:37 PM 2 comments: