In summary, I came away with the thought that a sea-change had just taken place in doing genealogy.

We have been given the challenge to "fill in the dash" when we do genealogy from now on. We will have to use, as Jane MacNamara so aptly put it, the "whole-family" approach - it will push us to write the family's history, not to merely record the birth and death dates of a person's life.

Some closing thoughts on the conference -

1. On Friday night, we were introduced to our new patron, The Honourable Vivienne Poy, a Senator in the Canadian Parliament, by OGS President Don Hinchley. 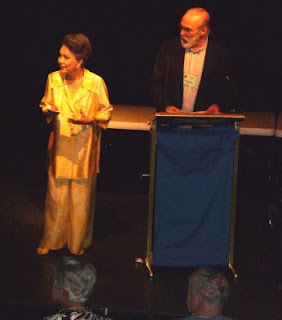 She spoke very eloquently about tracing her roots back though Hong Kong to China and she hopes to bring the same enthusiasm to her new position with the OGS.

She replaces Senator Lorna Milne, who did such great work in bringing the 1911 Canadian Census to the people so that everyone can research their family history.

2. On Friday afternoon, I attended the Irish Palatine workshop in which Hank Jones (right) received the first Eula C. Lapp Award in front of a sell-out crowd from Denis Jones for his work on the Irish Palatines. 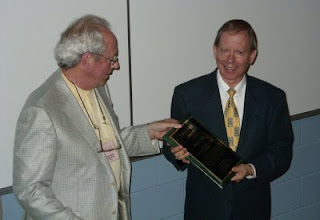 I learned that the group is putting together a book of genealogies of the Irish Palatines in Ontario, and Ruth Chernia of the OGS Publications Branch is helping out with the gathering and proofreading of the manuscript.

If you have Irish Palatines in your family, would you please contact her at <publications@ogs.on.ca>.

3. On Saturday morning, at the awful hour of 8:00 a.m. (we were tired due to a reception after the Opening Ceremonies), we gathered to hear Brian Gilchirst talk about "Pedigree and Progress: Making connections in the digital age from the printed page".

He talked about the progress that has been made in digitizing the information, but said that indexing it is falling behind. Of what use is it to scan and yet not prepare an index so that people can put in their family names to see if there is anything on them?

Right after Brian's speech, we had the AGM, and it was supercharged this year with the request for an increase in membership dues.

After much discussion and various amendments, the vote was taken, and it was a "yes" vote for the increase of the basic membership fee to $60.00 from the current $45.00, starting next calendar year.

The OGS also put out a call for people to index the OGS Library, which is going to be digitized and put online.

It will include over 3,000 family genealogies, but they need to be indexed so that they can be searchable online.

4. On Saturday afternoon, I went to the panel discussion on "From the Printed Page to the Digital Age ... The Professionals' Perspective". 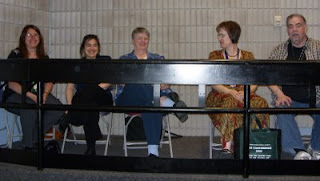 The audience that was there asked many questions of the panel, which included Susanna de Groot, Janice Nickerson, Ruth Burkholder, Tammy Tipler-Priolo, and Brian Gilchist. It was moderated by Sharon Murphy.

It was sponsored by the Ontario Chapter of the Association of Professional Genealogists <http://ocapg.org>.

From the answers they gave, I gather it's quite a lonely life being a genealogist, looking at a computer screen all day long (something like a writer) and how important listserves are so that genealogists can talk over their research problems.

They talked about how the Internet has changed the way they do research, and people are asking different types of questions these days - more away from, "When was he born?", and more towards, "What can you tell me about his life as a grocer in Toronto in the 1850s?"

5. On Saturday night, we went to a local banquet hall to hear Charlotte Gray talk about what it is like being a biographer - which is where genealogy is heading. She is being introduced by Halton-Peel Chairman, Bob Crawford. 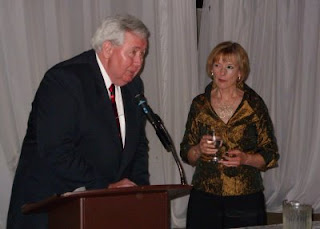 She gave us a sound footing of how to research history to write a biography, and she has written many, including one of Alexander Graham Bell.

At present, she is working on the people of the Klondike and she will be at the BIFHSGO conference this September, and at that time will give a talk on Sir John A. Mcdonald and his women!

6. On Sunday, I spent some time at the OGS Publications table to talk to people as they came by and generally got good reviews of the work I do on NewsLeaf and e-NewsLeaf.

All-in-all, another great conference, and well-worth both the fatigue of doing so much, and the sadness of having to say good-bye to old friends and acquaintances for yet another year.
Posted by Elizabeth Lapointe at 1:13 PM 1 comment:

"Filling in the Dash" 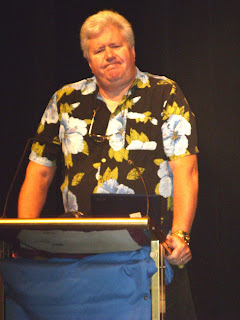 At the graduation ceremony of the National Institute for Genealogical Studies <www.GenealogicalStudies.com> on Friday afternoon, Todd Poertner gave an entertaining speech to the 40 graduates and their invited guests in which he said his wife, Rebecca, was prone to taking genealogical vacations.

When he asked her why she was doing this, she said she was gathering information to "fill in the dash". That is that “-” sign we have all come across in our research that denotes a lifetime spent between birth and death. What type of life did this person live?

And the way to this type of research — filling in the dash — was exactly what Kory Meyerink spoke about in his speech that evening. 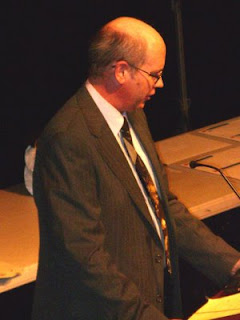 "It's time for genealogists to become family 'biographers' and get beyond just names, dates, and places," was how he started in his lecture, "Beyond the Begats: Developing Biographies from Paper and Digital Sources."

He said we call it family history for a reason, and the reason is - because it is not JUST genealogy!

We just don't copy down a series of dates and say, "That's it, I am finished with it now!", or at least he hopes we don't. He encourages us to write a "Family Biography", and he gave us a list of sources to check as we start our biographies.

Continue to use the traditional sources, as we all do, like census records, BMDs, etc, but go beyond them, gathering the "extra" information like local histories, military files, court and civil records, and newspapers.

He also advise us to become "miners" of databases.

This term these days is becoming rather dated in Internet times, but it still applies if you are doing genealogical research.

Some of the databases he suggests in "mining" are <www.Ancestry.com> (they have over 1,400 databases of Canadian records), <www.WorldVitalRecords.com>, <www.Footnote.com>, <www.FamilySearch.org>, and <www.CollectionsCanada.gc.ca>, which includes the Canadian Genealogy Centre.

He left us with a two page bibliography, which I intend to research. I am sure that I will come across some books that will pique my interest, and I will read them - especially the books about immigration histories.

John Becker, the editor of the OGS journal, Families, tells me that this lecture will be reprinted in a future issue. Be sure to watch for it!
Posted by Elizabeth Lapointe at 7:18 PM 1 comment: 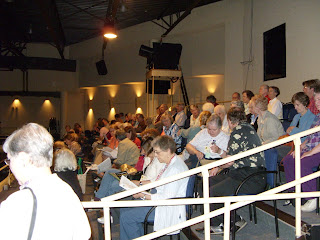 Well, the fun is over - Conference '09 ended at 3:00 this afternoon, with the news that next years' conference will be held May 14-16 at the DoubleTree by Hilton at the Toronto Airport.

So it's farewell to Oakville and the many friends I leave behind for yet another year.

I'll be on the road all day tomorrow, going back to Ottawa, and I will blog more about the conference and its sessions the rest of the week.
Posted by Elizabeth Lapointe at 3:38 PM No comments:

This is the last day, and although a bit tired because of yesterday's hectic schedule and last night's banquet, we are here early this morning at the computer room, still searching for ancestors. 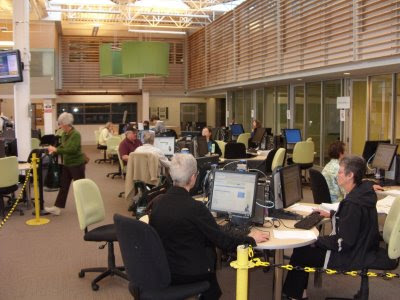 I am going back to the Marketplace to get information on next year's conference in Toronto, to be held May 14 to 16. This afternoon, at 2:15, the closing remarks and final goodbyes will be held.

I am going to spend some time at the OGS Publications Table (as editor of NewsLeaf and its sister email publication, e-NewsLeaf).

And as a representative of the International Society of Family History Writers and Editors (ISFHWE) — in my capacity as International Director — I am letting others know what a great organization it is for writers http://isfhwe.org/

I will posting more on this conference in the next few days.
Posted by Elizabeth Lapointe at 10:15 AM 1 comment:

Just a few minutes ago, the attending members of the Ontario Genealogical Society, at their AGM, voted overwhelmingly to increase membership dues from $45 to $60 a year, beginning next year.

More to follow on this ...
Posted by Elizabeth Lapointe at 10:54 AM No comments: 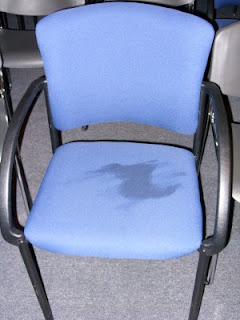 ... what you get when you mix a conference, a festive atmosphere, rabid genealogists, a graduation ceremony, a librarian, coffee, and a chair ... 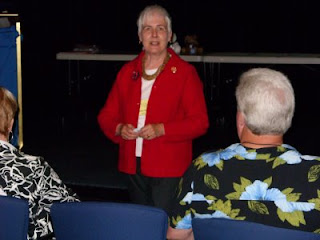 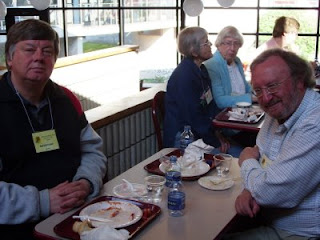 Up-and-coming blogging superstar, John D. Reid (on the right), of the Anglo-Celtic Connections blog <http://anglo-celtic-connections.blogspot.com>—fresh from his trip from Ottawa—is enjoying a fine cold-plate supper with fellow genealogist and guest speaker, Gary Schroder of the Quebec Family History Society <http://www.qfhs.ca>.

This is the culmination of a very exciting afternoon, filled with a visit to the Marketplace (again) to see more newly-arrived exhibitors, the chance to meet more acquaintances, a workshop hosted by the Irish Palatine special Interest Group (IP-SIG), and the graduation ceremony of the National Institute for Genealogical Studies <www.genealogicalstudies.com> (more to follow on these activities).
We're now off in a mad rush to the opening ceremonies!
Posted by Elizabeth Lapointe at 6:20 PM 1 comment: