Posted by Elizabeth Lapointe at 7:07 AM No comments: Links to this post

95th Anniversary of the Battle of Vimy Ridge 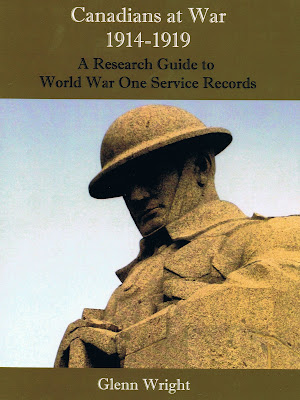 One just has to say "Vimy Ridge" to any Canadian, and we think of the sacrifices that our fellow countrymen have made in the First World War. And this year. Major Arthur William Currie, grandson of  famed Canadian commander, General Arthur Currie, will lead Ottawa-area cadets on a pilgrimage to Vimy Ridge.

The cadets are from the Ottawa unit of the Royal Canadian Dragoons Cadet Corps, and they will see Vimy Ridge today. They will participate in a Remembrance Ceremony organized by the government.

To find out more about the Memorial, please visit http://veterans.gc.ca/eng/feature/vimy-ridge/history.

To learn more about Vimy Ridge, visit the following websites –

Canadian National Vimy Memorial Stone Display www.veterans.gc.ca/eng/memorials/cbmr/wall_stone_display See if your ancestor is on the Memorial.

Canadian War Museum www.warmuseum.ca/home See the events and displays at the museum on Vimy Day.

If you want to find out more about your ancestor in the First World War, Glenn Wright has written an excellent book, Canadians at War 1914-1919: A Research Guide to World War One Service Records. I have used this book many times to help me answer the questions that my clients have about their ancestors in the First World War.

It is available from Global Genealogy at http://globalgenealogy.com/countries/canada/military/resources/101160.htm
Posted by Elizabeth Lapointe at 6:00 AM No comments: Links to this post

Richmond Hill Public Library located at the corner of Yonge Street, and Major Mackenzie Drive has a genealogy library on the library’s fourth floor (now known as the Mary-Lou Griffin Room) to house information about Richmond Hill.

They have had public lectures during the winter/spring season called "Finding Our Roots Online", and they have two sessions left -

Googling for Genealogy: How to Take Advantage of all Google has to Offer

Most genealogists know that Google is a good place to start to find family information on the Internet but many don’t know how to get the best results from this search engine nor do they take full advantage of everything else Google has to offer. Author, librarian and genealogist Marian Press will guide you through Google alerts, image searching, Google Maps, Google Books, Google News Archives, Google Blogs, Google translation tools and more

Working with the databases and creating a family tree online can make it easy to keep track of your family. We all know Ancestry has the Ontario births, marriages and deaths and some of the census returns but what else is available to help us find our family? Join author, historian and genealogist Ruth Burkholder and find out

Tickets for each program is $5.00 per person.

The website is at http://www.rhpl.richmondhill.on.ca/
Posted by Elizabeth Lapointe at 6:00 AM No comments: Links to this post

The Ontario Genealogical Society is pleased to announce that we have been granted funding by the Ontario Trillium Foundation to begin Phase 2 of our Keeping and Valuing Ontario’s Heritage Project. The funding consists of $156,000 over two years and will allow us to continue to assist heritage organization in scanning their materials and making them available to researchers.

Phase 1 began in Fall 2008 with the aim to do the following:
Since then we have successfully joined with several heritage organizations to digitize their records and make them available online through a revenue generating program. We have launched a beta version of The Ontario Name Index (TONI) as the main access point to the Pay-Per-View database. The information available through Pay-Per-View allows access to the history of the people of this province.

Phase 2 seeks to continue to support the preservation of heritage materials through digitization by adding to the data available on this system and expanding our affiliations to include new heritage organizations.

We will improve and expand on TONI while creating new indexing systems where necessary.

We will also create and launch a more user friendly search interface for TONI and Pay- Per-View to ensure that researchers can find and access their information with ease.

Posted by Elizabeth Lapointe at 6:00 AM No comments: Links to this post

Sable Island Will Be a National Park Reserve

Sable Island was passed from the Canadian Coast Guard to Parks Canada this week, and the sandbar where so many ships went down (shipwrecked), and lives were lost, will be recognized as a National Park Reserve.

Over the recent years, more requests have been made by people wishing to visit the island, and it was believed that Parks Canada was best equipped to answer these requests.

“Today’s historic agreement will ensure that this iconic and valued Canadian landscape fabled for its wild horses, shipwrecks and one of the largest dune systems in Eastern Canada, will be protected as a national park reserve.

Located 290 kilometres offshore from Halifax, Sable Island is a windswept crescent-shaped sandbar 42 kilometres long that emerges from the Atlantic Ocean near the edge of the Continental Shelf. The island’s sand dunes and fresh water ponds are home to over 400 wild horses and numerous migrant and breeding birds, including the rare Ipswich Savannah sparrow", said Minister Kent in the press release.

Called the "Graveyard of the Atlantic”, there were over 350 shipwrecks recorded here since 1583 due to the fog and storms that beset the island from time to time.
Posted by Elizabeth Lapointe at 2:00 PM 1 comment: Links to this post

I received my first issue of the newsletter Branches, Twigs, and Roots this week.

Sue has an interesting topic this month in her newsletter, and it’s about how doing genealogy in different cultures can lead to brick walls.

She gives an account of a query she received by a reader in which she was asked to help find Edward Mayo/Maheux and his wife Ann Toose of Quebec. Were they of different cultures - or are they from the same culture? Is Edward French? Is he Irish? Are there any clues in their surnames?
Read about her case study, and what she has to say about taking culture into account in working through the problem.

While you are there, look at the various topics which she has included to help you in your researh.
Posted by Elizabeth Lapointe at 7:00 AM No comments: Links to this post