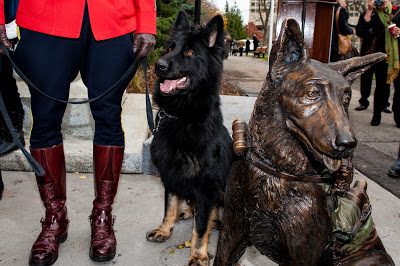 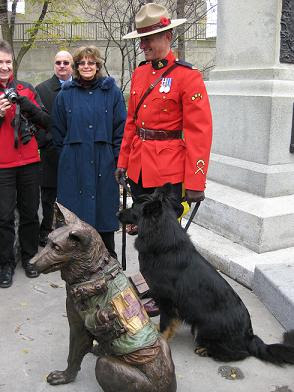 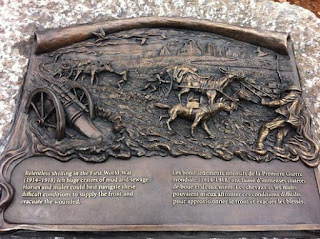 Animals—such as mules who carried artillery; carrier pigeons who delivered messages; horses who hauled field guns; and dogs who worked as medical assistants, mine detectors, and in search and rescue—have always served in wars, and they had a monument dedicated to them on November 3rd in Confederation Park in Ottawa, Ontario. Dogs are still used today by the Canadian Armed Forces.

For more information, please go to the Animals in War Dedication Project website at http://aiwdedication.ca. Laureen Harper, wife of the Canadian prime minister, The Right Honourable Stephen Harper, is the Project's Honourary Patron. Both Mr. and Mrs. Harper are well-known animal lovers.

Mascots and Pets - www.warmuseum.ca/cwm/exhibitions/guerre/mascots-pets-e.aspx The Canadian War Museum has a short history on mascots and pets that Canadian soldiers had in the wars that they fought.

At the end of Valiant, an animated family movie about carrier pigeons in the Second World War, a list of recipients of animals who have won a Dickin Medal for wartime service is shown. Essentially, the Dickin Medal is the equivalent of the Victoria Cross Medal, but for animals, and it has been awarded to pigeons, horses, dogs, and a cat.

There is a Canadian connection to one of the recipients, and it refers to a pigeon named Beach Comber (Pigeon - NPS.41.NS.4230, Date of Award: 6 March 1944) “For bringing the first news to this country of the landing at Dieppe, under hazardous conditions in September, 1942, while serving with the Canadian Army.”

For more on the Dickin Medals, including a list of the animals and their citations for bravery, please visit www.pdsa.org.uk/about-us/animal-bravery-awards. A civilian equivalent, the PDSA Gold Medal, is also available.

Question of the Day: Winnie the Pooh, one of the most famous of animal mascots, was a young Canadian black bear cub that travelled overseas with an army unit in the First World War. What was his real name? Send your answer to Elizabeth at genealogycanada@aol.com by midnight, Eastern Standard Time. Please put “booklet” in the title, and remember to submit your full name and postal address. A winner will be chosen by random draw from every eligible entry received.