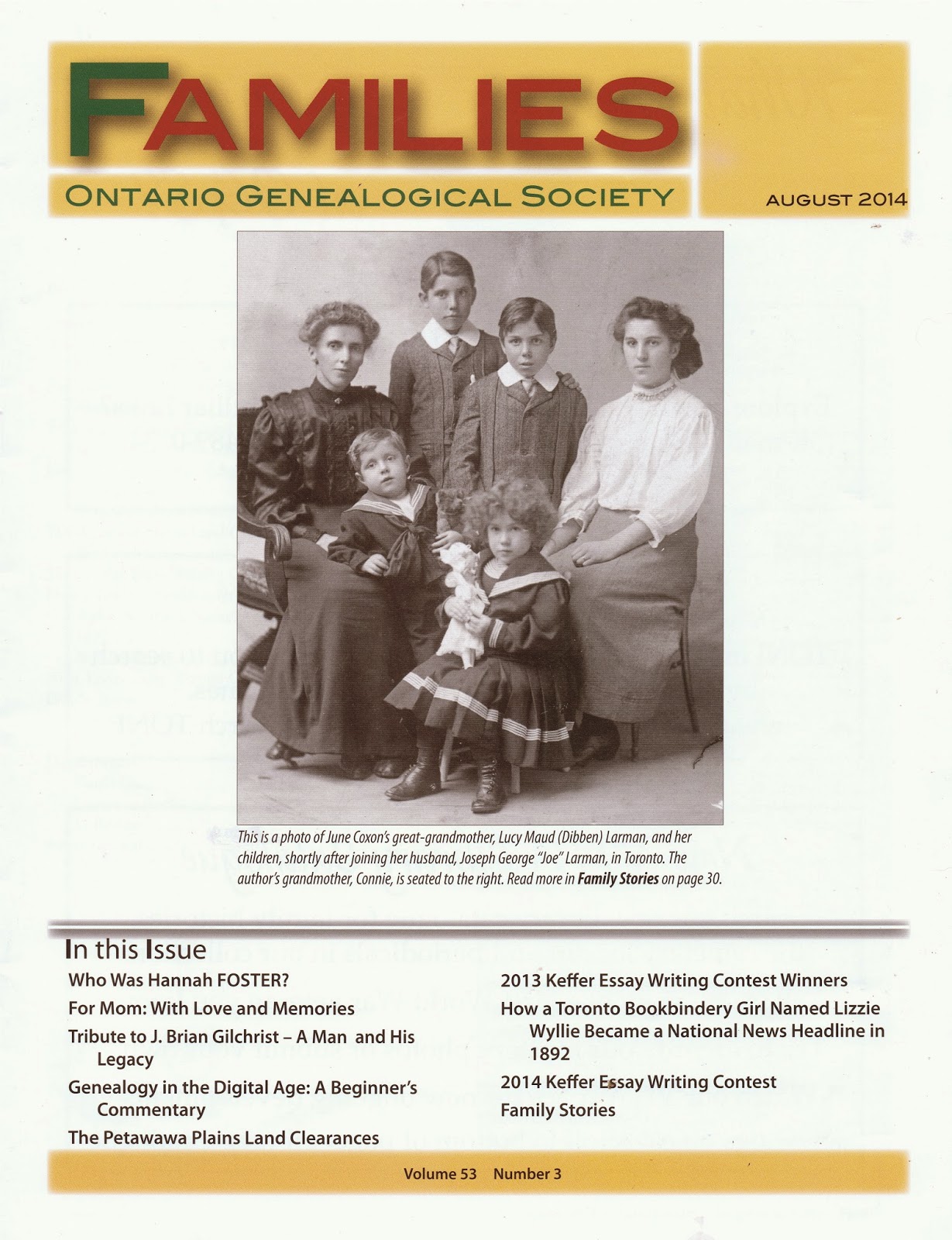 The  August 2014 edition of Families, the journal of the Ontario Genealogical Society, has just been published, and there are six articles in this issue.

The first prize in the Keffer Writing Contest this year goes to H. Nancy Holder and her article entitled, Who was Hannah FOSTER?

We find out that the author is from Arkansas, and that much to her surprise, she discovered that her great-grandmother was from Ontario!

This year's winner of the 2014 Mike Brede Genealogical Essay Prize was Chelsea H. Meloche, a graduate student at the University of Waterloo, for her winning essay, Genealogy in the Digital Age: A Beginner’s Commentary.

She wrote this article as a “newbie” who got caught up in the merry-go-round of online databases, and she wondered how new researchers will do in this world of instant genealogy.

For Mom: With Love and Memories by Marianne Perry is the story of her family’s Italian heritage. The author has made two genealogical research trips to southern Italy, and writes about her Calabrian-Sicilian ancestry, and the new lives of her immigrant ancestors in Toronto and Ottawa.

How a Toronto Bookbindery Girl Named Lizzie Wyllie Became a National News Headline in 1892 by Richard Deuel is a genealogical  mystery about Lizzie Wyllie, whose family migrated to the Michigan area from Bowmanville, Ontario in the late 1800s, and her supposed suicide which took place in San Diego.

The Petawawa Plains Land Clearances by Robb Gore is a piece about land clearances and the forced eviction of settlers by the Canadian government for the building of a training center in preparation for the First World War. The training centre eventually became Canadian Forces Base Petawawa, as it is today.

And the issue is completed with June Coxon's Family Stories, recollections about her mother growing up in Toronto in the early 1900s.

If you wish to become a member so that you can receive Families, along other benefits, please visit http://www.ogs.on.ca/become_a_member.php
Posted by Elizabeth Lapointe at 12:30 AM