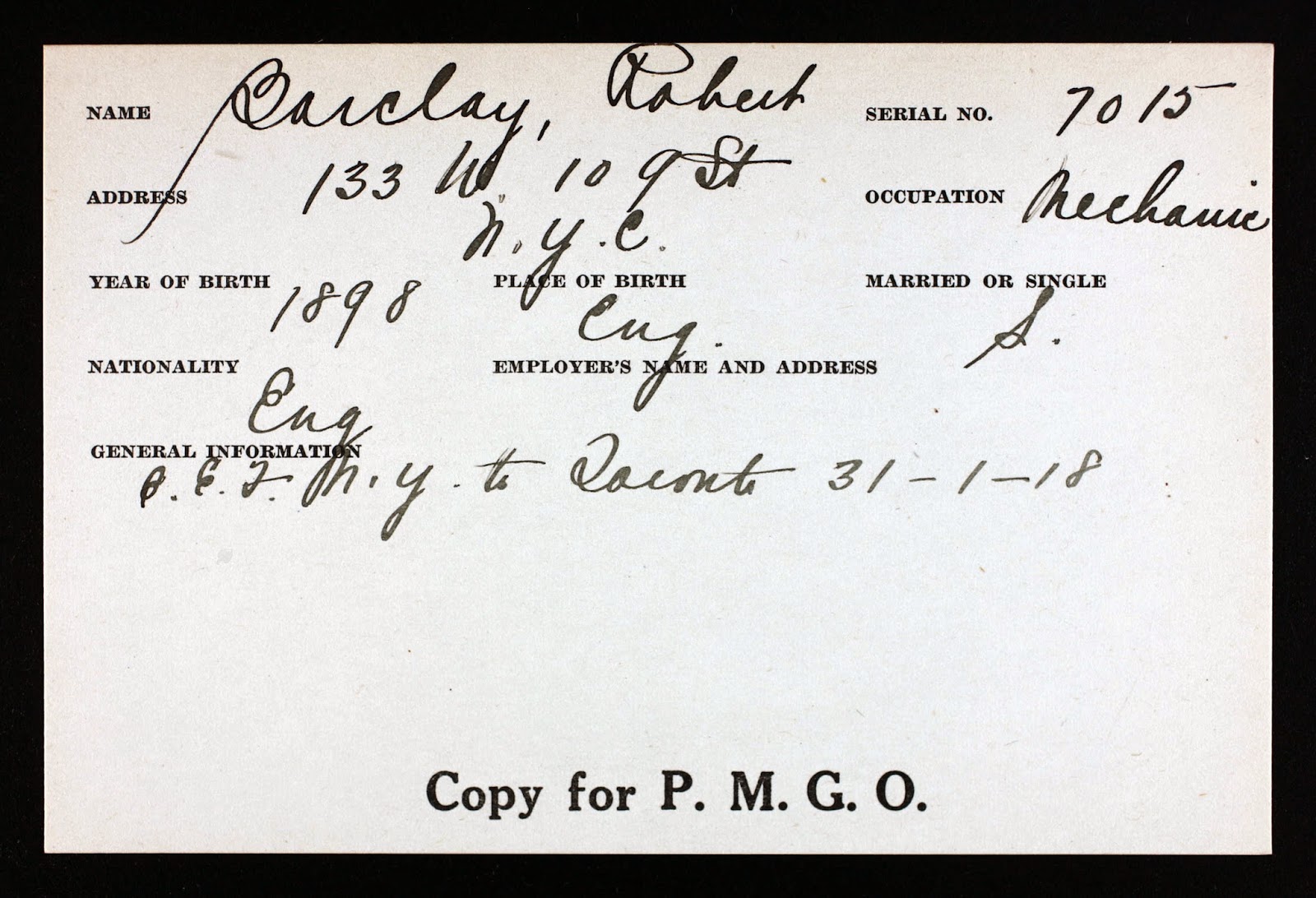 It has always intrigued me about Americans who enlisted in the Canadian army in the First World War. Why would they do that? But I slowly discovered that most likely one of their parents, or both of their parents had come from Canada down to the United States, with many of them leaving cousins, aunts and uncles back in Canada. And, further still,  and many of them had been born in England, Scotland, and Ireland. So they felt a certain loyalty to their country of birth, I suppose.

But now, Ancestry.ca has put the record group online, and it is called U.S. Residents Serving in Canadian Expeditionary Forces, 1917-1918.

Each entry contains the name of the resident, his address in the United States, date and place of birth, nationality, marital status, occupation, and place and date of entering service.

So, if you find that an American ancestor has disappeared between 1914 and 1919, check this database. Maybe he is here at http://search.ancestry.ca/search/db.aspx?dbid=9177


It’s the ONLY news blog of its kind in Canada!
It has been a regular post every Monday morning since
April 23, 2012.
Posted by Elizabeth Lapointe at 12:30 AM 1 comment: Links to this post

During a reception at the Canadian War Museum on August 4th, which marked the 100th anniversary of Canada’s entry into the First World War, the unveiling of the historical officer rank insignia took place.

“The restoration of the Canadian Army’s historical identity reinforces the ties between present-day soldiers and previous generations of warriors, while celebrating our proud Army heritage. Canadian Army officers will wear these insignia knowing that they carry on a strong legacy of service, while standing strong, proud and ready for the future,” said Lieutenant-General Marquis Hainse, Commander of the Canadian Army.

You can read about the Canadian Army at http://en.wikipedia.org/wiki/Canadian_Army
Posted by Elizabeth Lapointe at 7:33 AM No comments: Links to this post

There is news in Ottawa this morning that Canada will return the titles of the Maritime Command, Air Command and Land Force Command to their former title of the Canadian Army, Royal Canadian Air Force, and Royal Canadian Navy today.

It will happened 100 years to the day that the British granted Royal Consent to the Naval Service of Canada that it could call itself the Royal Canadian Navy.

If you want to read of their history, the websites are -

The History and Heriitage of the Royal Canadian Air Force http://rcaf.com/

Posted by Elizabeth Lapointe at 7:03 AM No comments: Links to this post