A SIG is a permanent group of OGS Members with an interest in some other topic, such as a geographic location outside Ontario (e.g. immigrants from a particular country), an ethnic or cultural group (e.g. natives or a particular fraternal organization), or an event (e.g. a particular emigration scheme).

If you are interested in joining this SIG or taking on a role of responsibility, please contact OGS President, Shirley Sturdevant president@ogs.on.ca.

There is an interest in establishing a Huguenot SIG and a Métis SIG; both are currently seeking the necessary 25 Members.

E-mail the Provincial Office http://provoffice@ogs.on.ca if you would like to see one of these formed.


The obituaries from the Toronto Star have recently been updated on Ancestry.ca.

Over 17,000 images have been added to the database, and the database contains more than 98,500 names

Go to http://search.ancestry.ca/search/db.aspx?dbid=3888
Posted by Elizabeth Lapointe at 6:16 AM No comments: Links to this post

From a post on the Regina Public Library blog, comes this news -

Readers are invited to submit an article about any aspect of Saskatchewan’s history for possible inclusion in the Spring-Summer 2014 issue of Saskatchewan History, a publication from the Saskatchewan Archives Board.

The deadline for submission of articles for our Spring-Summer 2014 issue is December 13, 2013.

At this time, we seek submissions including: scholarly papers that may be peer-reviewed; feature articles of varying lengths; photo essays; and book reviews about literature related to the history of Saskatchewan and the prairie provinces.

A copy of the magazine’s submission guidelines can be viewed on our website at www.saskarchives.com.

Submissions can be forwarded electronically to saskhistory@archives.gov.sk.ca.

For more information, contact Nadine Charabin, Publication Coordinator, by phone at 306-933-5832, or by email at saskhistory@archives.gov.sk.ca.
Posted by Elizabeth Lapointe at 12:00 AM No comments: Links to this post

New Minister for Department of Heritage

Minister Glover, a Métis, is the Member of Parliament for the riding of Saint-Boniface in .

Her profile says that “Prior to entering federal politics, Mrs. Glover served as a member of the Winnipeg Police Service for almost 19 years. She had a diverse career in a variety of positions including undercover work, child abuse investigations, youth crime and gang investigations, and general patrol. Mrs. Glover has a high level of proficiency in the French language and was the first female and bilingual spokesperson appointed by her department”.

While we welcome Minister Glover to her new post, you will notice that there is nothing in her profile which would lead anyone to believe that she will be sympathetic to the genealogy community, the Library and Archives Canada, or the 1921 Canadian Census (and its release), as was the impression given by her predecessor Minister Moore, who is now the new Minister of Industry.

Posted by Elizabeth Lapointe at 9:35 AM No comments: Links to this post

The 2013 Toronto History Lecture, titled Mary Mink: The Making of a Myth, will explore the sometimes blurred line between historical fact and historical fiction. James Mink was a successful Black businessman in Toronto in the 1840s and 1850s. His story is one of the best known tales of Black Torontonians in the 19th century, told and retold many times in newspapers and books.

In the 1990s, his story was made into a TV movie, Captive Heart: the James Mink Story, which was broadcast in Canada and the United States. In the screen version of events, Mink arranges for a white man to marry his daughter Mary and then stages a daring rescue when her husband whisks her off to the American South and sells her into slavery. The movie is said to be “based on historical records”, but as Guylaine Pétrin found out through her research, records can lie.

Admission is free, but reservation is required.

Please join us again this year in spreading the word about the Toronto History Lecture. It will be held on August 7th at 7:30 pm at the City of Toronto Archives and is presented jointly by the Archives and the Toronto Branch of the Ontario Genealogical Society.

For further details, including a map and driving directions to the Archives at 255 Spadina Road, visit http://conta.cc/187ZUcY. Questions may be directed to info@torontofamilyhistory.org  or Paul Sharkey (City of Toronto Archives) at 416-392-5561.

We look forward to unravelling the true story of Mary Mink with you on August 7th.
Posted by Elizabeth Lapointe at 7:03 AM No comments: Links to this post

No new web sites this week.

Doukhobor Photos http://doukhoborphotos.blogspot.ca  Yvonne Demoskoff , a  Canadian blogger, has a new blog which is “ showcasing vintage "orphan" photographs of Doukhobor people in Canada”.

Conference 2014 is being hosted by Niagara Peninsula Branch of the OGS and will run from May 1-4, 2014 at Brock University, St. Catharines, Ontario.

Prepare for your visit by checking out their video at www.ogs.on.ca/conference2014/index.php

Newspapers Articles of the Week

A couple of weeks ago, I made note of a bylaw in Brant County (Ontario) which did not allow etchings on the back of gravestones, this is the way that Koreans mark their genealogy of the departed.

News has come now that the Brant councillors have approved a revised cemetery bylaw that will allow genealogical writing on the reverse of headstones.

The story is covered in the newspaper www.brantfordexpositor.ca/2013/07/02/new-bylaw-allows-etchings-on-back-of-monuments

New Maryland Historical Trust sign to recognize Acadian heritage on the shore http://maryland.newszap.com/crisfieldsomerset/123293-92/new-maryland-historical-trust-sign-to-recognize-acadian-heritage-on-the-shore?printerfriendly=true  Nearly 260 years ago, a small group of Acadians
refugees landed on the shores of Maryland.  On Sunday, July 28 at 3:00 p.m, in the Manokin River Park, a Maryland Historical Trust Sign will be unveiled to recognize this fact.

One woman’s passion for genealogy www.gulfnews.ca/Community/2013-06-26/article-3293227/One-woman&rsquos-passion-for-genealogy/1  See how Claudia Lawrence from Port aux Basques, Newfoundland has put her family history together back to her great-great-grandfather.

Museums, library and archives facilities in Canada have been having a hard time lately.

First was the flood in Alberta which completely wiped out the Museum of the Highwood in High River. Now I hear that the people of High River are getting first class help from the conservation people from Calgary. They have come down to help the staff at the High River museum decide what to keep and what to throw away, and to get the museum back on its feet again.

Go to the www.museumofthehighwood.com to read the latest update on the Museum of the Highwood.

Then we had the news of the terrible disaster at Lac Megantic, in the Eastern Townships in Quebec, with the runaway train accident that occurred early Saturday morning last week. In addition to the astounding loss of life, there has been the fact that the town’s library and archives has been lost in the fire which engulfed the town.

Read the story at http://metronews.ca/news/canada/737250/library-archives-destroyed-in-train-disaster

And then just yesterday, I heard that the Thistalalh Memorial Library at Bella Bella, a British Columbia remote First Nations village on the province’s northwest coast, has been destroyed by fire. The library was housed in a building which also was home to the village’s general store, Alexa's restaurant, and the Koeye Cafe.

It is covered by the CBC in their story at www.cbc.ca/news/canada/british-columbia/story/2013/07/12/bc-bella-bella-fire.html?cmp=rss

Reminder: Check out Canadian Week in Review every Monday for the latest in Genealogy, Heritage, and History news in Canada. The next post will be posted 22 July, 2013
Posted by Elizabeth Lapointe at 12:00 AM 2 comments: Links to this post 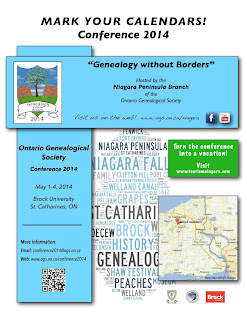 The OGS Conference 2014 will be held at Brock University, St. Catharines, Ontario (near Niagara Falls) May 1st to May 4th. It will be sponsored by the Niagara  Peninsula Branch OGS.

And already there is a video on the site www.ogs.on.ca/conference2014/index.php, and you can see what is available in the immediate area.

Watch for more news on the conference. It sounds as if it is going to be exciting!
Posted by Elizabeth Lapointe at 12:27 AM No comments: Links to this post