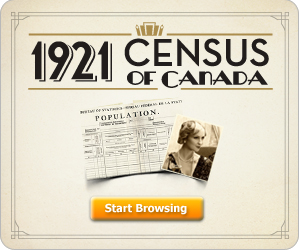 Have you taken a look at it yet? What do you think?

The 1921 Canada Census was the first census taken after the end of the First World War, and Canada was not in the best of shape. There was a mini-depression after the war was over, and in a few years, the Great Depression would take hold. Many of the soldiers could not find work, and so many of them were hired as enumerators of the 1921 census. Maybe your ancestor was an enumerator.

But you will not be able to search an every name index, only browse the census district and sub districts. It will continue this way until the index is ready, in as much as three months, so that would make it the middle of November.

And you will have to be a subscriber to Ancestry to get access to it, too. After three years, the Library and Archives Canada will put it on their site for free.

District and sub-districts are defined as “the districts for the representation of the people in the House of Commons at Ottawa, and Census subdistricts to the cities, towns, incorporated villages, townships and parishes which constitutes an electoral district”. 1

So you will have to know the district and sub-districts in which your ancestor lived in 1921. If you know those two things, then you should be able to find them.

Let me know what you think

1. Instructions to Commissioners and Enumerators in the Sixth Census of Canada, 1921 Government Printing Bureau, Ottawa 1921 p. 4
Posted by Elizabeth Lapointe at 2:39 PM

I spent an hour this morning looking for, and finding, 3 of 4 grandparents and their respective parents in rural communities in Ontario and Quebec, so I'm happy. The handwriting of the census returns is mostly legible, but looking through various districts and sub-districts is a bit challenging. Let's hope the nominal index will be ready sooner rather than later!

I'm glad you found some of your relatives. I got the "word" yesterday that it was going out today, and I had to wait for it, but there it was at 2 pm.I was so happy to see it.

They say 2 to 3 months for the every names idex - which will make it around mid-November.

Thanks to ALL OF YOU, I can now close the petition at Change.org. Check their News page though for further details. Must say all that work was a real pain, but now I can actually be productive. GREAT WORK!

Yes Bill, I agree. Without the help of genealogists from all over the world,the census would have sat there with nothing being done to get it relesed.

It's been a good day!

At that time period all my immediate family was living in Western Canada. One has to deal with Townships and ranges in the drop-down boxes. Here's a method that works IF your family was inclined to stay in one place for longer periods. If you have access to Ancestry (personal or at the Library) look for your person in the Canada Voters' List for 1935 - the Electoral District, township and range is listed at the top of the first page for the Polling division (must admit I already had those images saved). I then looked in the drop-down box under the Electoral District and scanned the entries to find where the township and range matched the information from the Voter's List. Once I found that, the first page with the cover sheet told me I had the right village and while I did have to examine the pages until page 35 I did find my grandparents, father and his siblings to that point.

Otherwise the Elections Canada electoral maps in conjunction with the history of various Electoral Districts (when they started, what they were, what they became, etc.) in Wikipedia might help.

Thanks very much Elizabeth!! I'm ready to search the 1921 census. Also thanks so much for such an informative blog and all the links to the different genealogy sites. Have a wonderful day! Judy

Thank you , Judy. It was quite an effort to keep abreast of all the talk in Ottawa concerning the 1921 census,but in the end, they pulled though, and it's finally here.