Bytown/Ottawa Settlers in the 1800s

2. Richmond Military Settlement, mainly Goulbourn Twp, Richmond, Stittsville and Ashton area, which started in the fall of 1818 and consisted mainly of soldiers of the 99th/100th Reg't

3. Rideau Canal settlement started when Lt/Col John By came to the area [eventually Bytown ] in 1826/1827 to build the Rideau Canal

He says that he will post on alternate Wednesdays between visits to Ottawa City Archives where he will gather info/data to post and rotate thru the three settlements above.

In 2 weeks time, on the 10 Apr 2013, there will be data/info on Hull and Philemon Wright settlers.

To read the post, go to  http://ogsottawa.blogspot.com/2013/03/bytownottawa-settlers.html
Posted by Elizabeth Lapointe at 5:49 PM No comments:

Manitoba Genealogical Society is going to have online databases

The MGS recently made an announcement that they are planning to put online indexes of cemeteries, vital records information etc and it will be available to members and non-members alike.  The records will be on a pay-for-view basis.

They say that they will have indexes of historical records that even Ancestry.ca does not have!

I had an inquiry into the society about the amount of the discount before I reported it to my readers, and now I have the answer - the discount is $5.00 CDN.

Thank to the MGS for letting us know of their plans for 2013, and beyond. This sounds exciting, and I look forward to it as I have the family of Rev. Joseph Hogg from Nova Scotia in Manitoba at the turn of the 20th century.

To go to their website, go to www.mbgenealogy.com
Posted by Elizabeth Lapointe at 12:07 PM No comments: 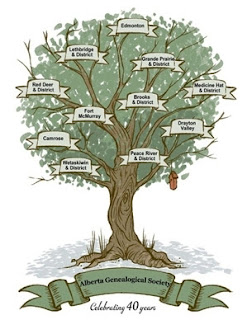 The Alberta Genealogical Society invites you to join them in celebrating their 40th Anniversary Conference “Same Roots, Different Branches” at the Chateau Louis Conference Centre, Edmonton, Alberta on 20 & 21 April 2013.

The conference committee have the pleasure of bringing the most electrifying and diverse international, regional and local speakers to maximize your conference experience.

The lineup of presenters include:

The conference opens with Stephen C. Young, a project manager with FamilySearch. His topic will be FamilySearch: Genealogy at Your Fingertips. Stephen will explore features and services on FamilySearch, WIKI that provides valuable research guidance, and information about indexing—an opportunity to “pay-it-forward”.

Fot those who are new to genealogy, there will be A Beginner’s Track is recommended for those just starting, however all participants at any level are more than welcome to attend.

Numerous door prizes, vendor merchandise and publications from AGS Branches will be for sale. And attendees have the privilege of pre-conference tours to Edmonton’s diverse specialized libraries and archives on Friday, 19 April 2013.

Registrations are now being accepted at www.abgensoc.ca/events.html#agsconf
Posted by Elizabeth Lapointe at 12:30 AM No comments:

Ealy bird registration will end on March 31st, 2013 at the OGS Conference in Oshawa this year.

For all other questions, please email Anne Delong, Conference Chair, at conference2013@ogs.on.ca and she will either answer your question or direct you to someone who can.

To read all about the conference, go to www.ogs.on.ca/conference2013
Posted by Elizabeth Lapointe at 12:39 PM No comments:

The website with nearly a million possibilities for people to search for their Nova Scotia roots is now available in French.

The Historical Vital Statistics website, maintained by the Nova Scotia Archives, has a searchable database containing nearly one million personal names. Each is linked to a corresponding birth, death or marriage registration, digitized and available online. The earliest records date from the mid-1700s and the most recent from the 1960s.

"One of the ways the province is making life better for Acadian and francophone families is by creating more access to bilingual services online," said Communities Culture and Heritage Minister Leonard Preyra. "The Historical Vital Statistics website is an invaluable genealogical tool for Nova Scotians to explore our family history and learn more about our culture and heritage."

The website is the only one of its kind in Canada that people can browse for records about their genealogy free of charge. The website is a popular destination for family history researchers and community historians from Nova Scotia and around the world.

To search for records on the Historical Vital Statistics website go to www.novascotiagenealogy.com. People can also purchase electronic or paper copies of the documents by ordering online and paying via secure credit card transaction.

The United Church of Canada’s Toronto Archives Is Moving

This is a press release that was released on their website on March 6, 2013, and may be of interest to my readers -

Toronto: The United Church of Canada announced today that its Toronto-based archives will be moving this summer from its current location at the United Church’s national office in west-end Toronto to the Toronto Christian Resource Centre in the Regent Park neighbourhood of downtown Toronto.

In announcing the decision on the new location for the archives, Nora Sanders, General Secretary of the General Council, said, “I am pleased that this move will mean not only that we will be saving a considerable amount of money but also that as a tenant we will be financially supporting a local United Church ministry.”

Sanders says that in addition to being able to house the United Church’s archival collection now located at the General Council Office at 3250 Bloor Street West in Toronto, the new location at 40 Oak Street offers more than enough space to accommodate records that are currently stored off-site at an archival facility.

She explains the decision to move the archives ahead of the anticipated relocation of the General Council Office to Bloor Street United Church in 2018 was an opportunity that made financial sense for all parties to the five-year lease agreement.

The United Church of Canada supports a network of archives situated in eight different locations throughout Canada. The archives in Toronto manages the records of the General Council and the Central Ontario Conference records of Bay of Quinte, London, Hamilton, Manitou, and Toronto Conferences and their respective presbyteries and pastoral charges. The church’s archives outside of Ontario are not affected by the move.

The United Church’s Toronto archives moved to its current location in 2008, after more than 50 years on the campus of the University of Toronto’s Victoria University. No decision has been made about whether the Archives will move again when the General Council Office relocates to Bloor Street United Church.

Nichole Vonk, General Council Archivist, will oversee the monumental task of moving close to 20,000 boxes of records to the new site. The church will be contracting specialized movers, the new location will meet the institutional standards set by the Canadian Council of Archives, and all the records will continue to be administered by professional staff.

Although not located directly on a subway line, the Archives’ new location at 40 Oak Street is easily accessible by public transit, will have on-site parking, and is closer to the United Church’s theological school at the University of Toronto.

While planning and preparations are underway to move the collection from its current location,

•the Archives will remain open during regular public hours until June 6, 2013.

•the Archives will not receive any records deposits after April 30, 2013. Records can be donated to the Archives when it reopens in September 2013.

•the Archives will continue to provide reference service for certificates or legal requests while it is closed to the public.

Vonk emphasizes that, throughout the transition, the church remains committed to providing continued uninterrupted, open access to its archival records related to residential schools for the purposes of the Truth and Reconciliation Commission.

For up-to-date information about The United Church of Canada’s archival programs and on the move, see the Archives webpage. Questions and concerns about the move should be directed to Nichole Vonk, General Council Archivist.

The archival website is at www.united-church.ca/local/archives/on
Posted by Elizabeth Lapointe at 3:13 PM No comments:

I have come across the following Canadian websites, blogs, Facebook, and newspaper articles this past week that were of interest to me, and I thought you might be interested in them, too –

There were no new/improved websites this past week.

If you want to get the Canadian viewpoint of RootsTech 2013, John D. Reid was there and reported on the events is his blog Anglo Cektic Connections at
www.anglo-celtic-connections.blogspot.com

And Diane Rodger was there also, and you can check her blog at CanadaGenealogy, or, 'Jane's Your Aunt' at http://canadagenealogy.blogspot.com/2013/03/canadagenealogy-at-rootstech-2013.html

Have you been to DearMrytle Facebook page yet, and seen her Genealogy Community? Lots of Canadians listen every Monday to DearMyrt.

Today at noontime (Eastern), she will have her weekly meet-up, and if you want to be up-to-date on genealogy happening around the world, she will have it. As she says, it is “A newsy, "across Myrt's desk" event, exploring all types of genealogy research techniques, challenges, technology and such”.

Go to her Facebook page to catch up on the latest news, www.facebook.com/DearMYRTLE, and her YouTune page to hear her Monday at noon (Eastern) www.youtube.com/user/DearMYRTLE

Public Libraries Under The Gun: Long-time neglect is catching up, say advocates
http://halifax.mediacoop.ca/blog/robert-devet/16796 Read how the libraries in rural Nova Scotia are struggling to maintain service to sparse and dwindling populations.

Rare Manitoba photos of Louis Riel found in Aus www.cbc.ca/news/canada/manitoba/story/2013/03/08/mb-rare-photos-louis-riel-austrialia-manitoba.html Rare, historic photographs of Louis Riel and Manitoba, taken in the 1860s and 1870s, were found amongst civil war memorabilia at a recent auction in Australia!

Discovering Sudbury's history http://www.thesudburystar.com/2013/03/23/ent--discovering-sudburys-history Nancy Vaillancourt of the OGS Sudbury Branch has written a column about the town’s history.

Rosa Harris-Adler: Listen carefully to heed call of long-gone forebears www.timescolonist.com/life/rosa-harris-adler-listen-carefully-to-heed-call-of-long-gone-forebears-1.96655 Learn how the writer sees her grandmother in the story she tells of her life.

Pictures and Story of the Week

The story this week has been RootsTech 2013 in Salt Lake City.

You can re-visit RootsTech and watch Live Streaming of some of the talks that were given at the conference. Go to www.RootsTech.org

You can see all three Keynote addresses, and two panel discussion session that I particularly liked which were The Future of Genealogy with Thomas MacEntee and panel, and The Genealogists Gadget Bag - Jill Ball and panel.

Both of these sessions really honed in on the “genealogy community” by discussing what genealogists would be looking for over the next five years (more records, ‘how-to-do’ websites, more crowd sourcing projects), and Jill Ball and her crew gave a good run through of what the genealogists carries with them when they go to cemeteries, reunions, and meetings.

Look for more articles next Monday April 1st.
Posted by Elizabeth Lapointe at 12:30 AM No comments: